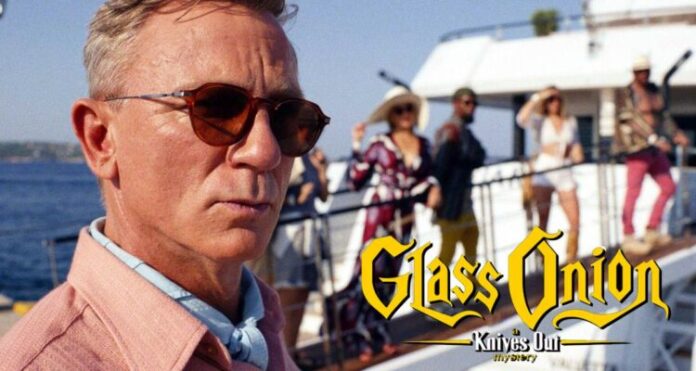 This could be the start of a new trend. Rian Johnson’s Knives Out, a detective whodunnit shot as his follow-up to Star Wars: The Last Jedi, was a gigantic hit in 2019, earning over $300M worldwide. While there was never any initial intention for a sequel, fan response was such that Johnson went for it. Only this one wouldn’t be vying for quite the same level of theatrical success, because Netflix swooped in to secure the sequels for itself.

That sequel, Glass Onion: A Knives Out Mystery, has now been revealed in a series of images from Netflix. Daniel Craig returns as southern-fried detective Benoit Blanc, as he finds himself knee-deep in another whodunnit, this time in Greece. The cast of suspects is just as starry as before, with the ensemble boasting Edward Norton, Janelle Monáe, Kathryn Hahn, Leslie Odom Jr., Jessica Henwick, Madelyn Cline, Kate Hudson, and Dave Bautista.

Johnson told Netflix in a recent interview, “I’m always fishing for something fun that Blanc can grab onto as an overwrought metaphor that he can beat to death. This is all in plain sight from the very start. So, the idea of glass came to me, something that’s clear. I’ll be very honest. I literally got out my iPhone and searched my music library with the word ‘glass.’ There’s got to be some good glass songs. I was like, “Oh, is it a glass fortress? Is it a glass castle? Is it a glass man?” The first thing that came up, because I’m a huge Beatles fan, is ‘Glass Onion.’”

Here’s the synopsis: In the follow-up to Rian Johnson’s KNIVES OUT, Detective Benoit Blanc travels to Greece to peel back the layers of a mystery involving a new cast of colorful suspects.

Glass Onion: A Knives Out Mystery will have its world premiere in Toronto next month, followed by closing out the BFI London Film Festival in October. While it has yet to set a date for a limited theatrical run, it will stream on Netflix beginning December 23rd.