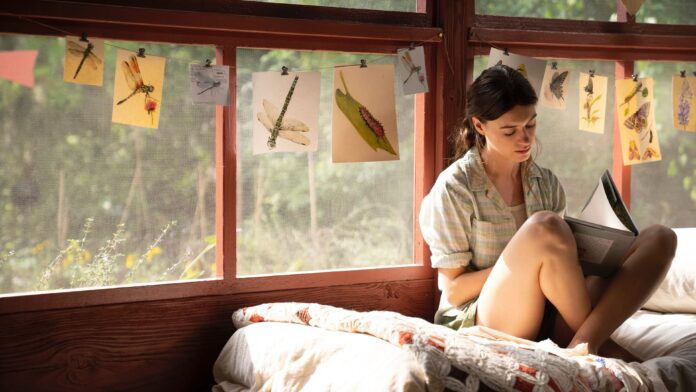 Daisy Edgar-Jones is having quite the year. She has been eaten in Fresh and murdered at the hands of Mormons in Under the Banner of Heaven. Now she’s accused of being a killer in the film adaptation of the best-selling book, Where the Crawdads Sing. What should be a showcase of Edgar-Jone’s talents, instead is clouded with questions of whether or not Delia Owens’ novel should have been adapted at all.

Where the Crawdads Sing follows the many literal and figurative trials of Kya (a dependable Edgar-Jones), known to her North Carolian community as “the Marsh Girl.” Abandoned by her mother and abusive father, she lives in a swamp relatively by herself with the occasional help from Black shopowners Mabel (Michael Hyatt)and Jumpin (Sterling Macer). After a devastating romance with a childhood friend (Taylor John Smith), she finds herself in a onesided relationship with the town’s golden boy Chase Andrews (Harris Dickinson). When he turns up dead, the entire town turns on her, rendering her guilty before the trial has even begun.

Edgar-Jones and director Olivia Newman’s aesethic are probably the two best things about this Reese Witherspoon produced film. The marsh setting really does feel like another character. Newman’s camera has the same reverence for Kya’s home terf that John Ford had for the American West in his legendary westerns. The visual nature metaphors aren’t overbearing, instead add to the complexity of a rather predictable and simple story.

This where we question whether or not Where the Crawdads Sing should have been made at all. The story feels very reminiscent of past book adaptations set in the South, films like The Secret Life of Bees, The Help, and Midnight in the Garden of Good and Evil. This is no knock on screenwriter Lucy Alibar, who wrote the southern set Beasts of the Southern Wild and Troop Zero. She does her best with a problematic story from a problematic author.

Delia Owens released Where the Crawdads Sing in 2018 where it quickly became a bestseller after Witherspoon showcased it in her book club. Before she released the mystery/coming-of-age novel, Owens was a conservationist known for her work with her husband in Zambia. In the 90s, they released a documentary where a poacher (who was never confirmed to be as such) was killed on camera. Supposedly her son was the killer. The family fled the country and is still wanted for questioning. It has since come out, instead of working with local communities in Zambia to stop poachers, that the Owens family believed Africans to be the source of the problem. On their now defunct website they referred to Africa as the “Dark Continent” and called for population control.

This brings into question why Witherspoon’s Hello Sunshine production company would make this movie in the first place. The author’s past, which made National headlines in the 90s, is clearly present in the book and its adaption, from its murder subplot, lack of Black representation, and white victim attitudes.

Kya is portrayed as as an ostercized and frankly discriminated against young woman whose class and birthplace leave her on the outskirts of society. However, are we really to believe that the most oppressed and ridiculed member of a 1950s/60s North Carolina town is a pretty thin white girl? This is not helped by Mirren Gorden-Crozier’s costume and styling. Young Kya looks like she lives in the woods, with matted hair and dirt-ridden clothes. Older Kya is prestinely put together, adorned in outfits that any Instagram influencers today would be wearing.

It’s just as problematic that there are only two Black actors in the cast (few Black background actors are seen). Again this takes place in a Southern town before, during, and immediately after the Civil Rights Movement. Black actors Michael Hyatt and Sterling Macer do their best to portray Kya’s surrogate parental figures Mabel and Jumpin as whole people, but they are reduced to side characters with no rich internal lives of their own. The way the story overlooks our nation’s own history to tell a supposedly feminist tale, feels inauthentic and negates anything good that Edgar-Jones, Newman, Alibar, and the rest of the crew have done with this film.

If Where the Crawdads Sing was made ten years ago, it would be a hit and no one would bat an eye. In a #Metoo and Black Lives Matter world, however, privilege reeks from a story like this. The movie only highlights Owens’ own biases, and frankly, how powerful white women in Hollywood are part of the problem when telling proportedly  intersectional feminist stories.