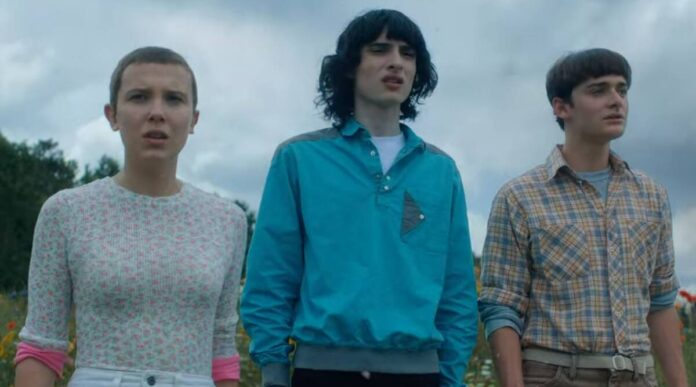 Season four of Stranger Things has been a bit all over the map, a byproduct of the Duffer Bros. breaking it up into two oddly-divided volumes, with each episode jumbo-sized in length. The first volume was scattershot as a result, with so much going on all across the map that nothing resonated quite as it should. But this show remains incredibly resilient. In the final couple of episodes, the action is bigger than ever with consequential changes for some of the most beloved fan-favorites. While the finale overwhelms with a nearly 2 1/2 hour runtime, it also has the epic scope, dramatic stakes, and dynamic showdown of a blockbuster summer movie.

The first episode, number eight titled “Papa”, probably should’ve been part of the first volume.  It picks up where the previous left off. Eleven (Millie Bobby Brown) continues to hash out her feelings with Dr. Brenner (Matthew Modine), following on the revelations of the villain Vecna’s (Jamie Campbell Bower) true identity. This episode, try as it might, feels like it was there merely to move the chess pieces in place. But that’s not to say there aren’t a few key developments, namely in the progression of the relationship between Hopper (David Harbour) and Joyce (Winona Ryder), still fighting their way out of a Russian gulag. Steve (Joe Keery) also continues to show his maturity when around Nancy (Natalia Dyer), who may or may not be the one who got away for him. It’s funny that despite an episode almost entirely dedicated to Eleven and Brenner, his arc’s dramatic conclusion fails to pack much emotional punch, possibly because this version of him is so incongruent with what we saw before. Reclamation projects are great, but Brenner is a tough sell considering all that he’s done.

As a whole, this season really put into the spotlight Sadie Sink’s Max, whose past trauma at the hands of her brother Billy informs her pain, and thus, vulnerability to Vecna. The impact on her former beau Lucas (Caleb McLaughlin) is that he has been forced to learn how to fight his own battles, while also being there for Max as she becomes Vecna’s prime target. Max and Lucas being my two favorite characters on the show, I found their arc to be totally satisfying, with Sink doing Emmy-worthy work as Max risks all to save Hawkins and her friends. While the sounds of Kate Bush are as much an earworm as ever, it’s Sink’s performance that really lingers throughout, culminating in a shocking moment that had me, well, very angry at the Duffers for a while. They won me back. I’ll leave it at that.

It does seem that the Duffers’ goal for this gigantic finale, titled “The Piggyback”, was to create a summer tentpole experience. It felt like Stranger Things doing their own version of Avengers: Endgame, with various teams formulating plans that will all come smashing together when it counts. Some of the logic leaps are pretty insane, especially in the world-saving qualities of a pizza pie, but there’s a “go with the flow” mentality throughout. That extends into the way every single character gets a hero moment to shine, and some of them are fucking awesome. By far the best new character introduced, the guitar-rockin’ dungeonmaster Eddie (Joseph Quinn) has a heavy metal clash for the ages, while Steve, Nancy, and Robin (Maya Hawke) stand shoulder-to-shoulder in a literal blaze of glory.

With so much going on, something has to get the raw end of the deal. The “Satanic Panic” crisis that launched the season really flopped after a few episodes. Even with so much extra time there wasn’t enough to do that subplot justice, and it didn’t mesh with the Vecna stuff as it could. That kind of manmade turmoil, which is based on real-life hysteria during the ’80s, would be terrific fodder all by itself for an entire season. By the time Jason (Mason Dye) reemerges suddenly, it’s like someone forgot they had this dangling thread and needed to tie-it-up. Paul Reiser’s Dr. Owens is done no favors, either. For a while it seemed he and Brenner were going to be this major force throughout, but Owens is an afterthought which is disappointing because Reiser is so good in the role.

In any other filmmakers’ hands I would say this was accidental, but the Duffers’ ability to use nostalgia in service of story is unparalled. A key component early on this season has been the game Dungeons & Dragons, which brought together Dustin (Gaten Matarazzo) and Eddie as eventual best friends. This season has played out a lot like D&D in that friendship and being a team are paramount, and the only way to win is to lean on the support of others. That theme carries throughout a massive, exhausting, but ultimately rewarding season makes you wonder what in the Upside Down will the Duffers do to top it for season five?