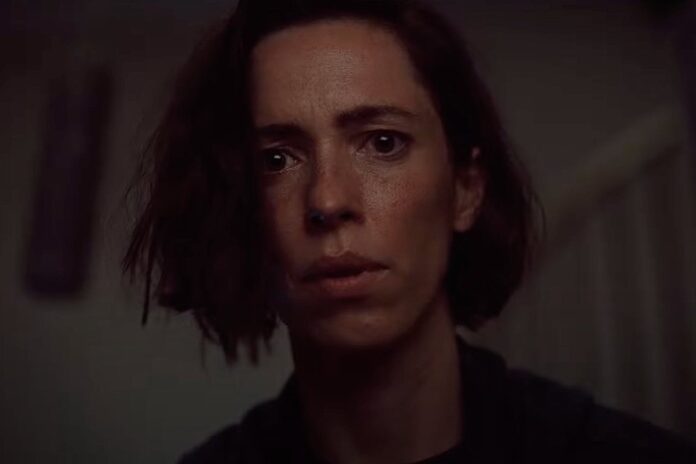 There’s something about the way Margaret (Rebecca Hall) offers advice to a naive co-worker about her abusive boyfriend. It sounds authoritative, too much so, like she speaks from a place of experience, like someone in complete control. Her life would suggest the same thing. She has a great, highly-professional career, a daughter, Abbie (Grace Kaufman), who is about to leave for college, and even a co-worker who happens to be a pretty good friend-with-benefits. But as we soon find out in Andrew Semans’ batshit thriller Resurrection, that semblance of control is only just that, an illusion.

Resurrection toes the line between ice cold mother/daughter/workplace thriller and nutty “What the fuck am I watching???” camp. It’s actually best when leaning into the latter, with the more tightly-wound moments acting as cover for some of the weirder shit Semans has in store, including some truly grotesque visuals. The film stars Hall as the titular Margaret, who at first appears to be an ordinary mother, perhaps a bit fearful of empty nest syndrome. She’s very protective of Abbie, some would say claustrophobic, but even that seems normal until weird things start happening. A rotting tooth is found in Abbie’s purse. Abbie suffers a biking accident and gets a gnarly-looking scar on her leg, causing Margaret to freak out even more, asserting tighter control over the girl.

But all of that is nothing compared to the return of the mysterious David, played by Tim Roth. When she first sees him, she immediately breaks down and can’t stop crying. Semans keeps the reasons why at bay for a good chunk of the film, but we can make assumptions based on what we’ve seen of Margaret and how she likes to be in control. This is someone who represents a chaotic part of her life, when he was the one in control. But it’s more than that. David’s grip on her was undeniable, almost like a superpower. He made her do things. “Kindnesses”, he would call them. And there’s more, something truly heinous, that he is still keeping from her.

While this all seems fairly by-the-book, the casting should tell you to expect something richer than that. Hall’s mere presence adds an intellectual element to the film; she’s always so reserved and analytical, which makes her so good at starring as people who come unwound. Look at her recent performances in Christine or The Night House, two shining Sundance thrillers, as prime examples. But the inclusion of Roth, as well, tells you David is no simple deadbeat ex-boyfriend.

So what happens when abuses of the past are revisited in the present? Semans’ films offers a chilling look at the long-term grip of physical and emotional abuse, but is less compelling as it drifts into traditional shlock midnight movie tropes. That said, Semans offers up quite a few shocks and imagery that will burn (literally in one case) themselves into your brain. And you have to give Semans credit for refusing to take his foot off the pedal. As Resurrection takes one twisted, unfathomably monstrous turn after another, increasing in ridiculousness, Semans lets it rock, taking the final showdown to its inevitably bloody, satisfying conclusion.