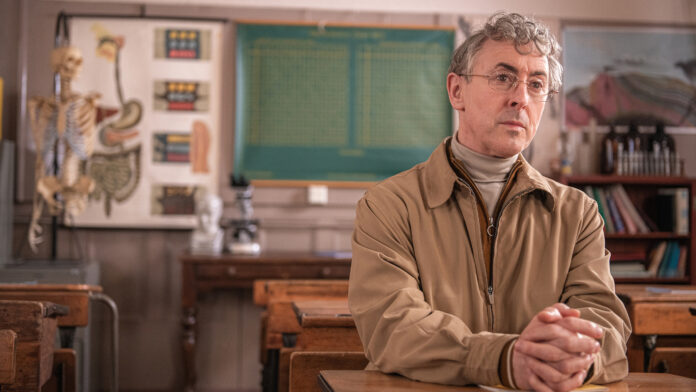 *NOTE: This review was originally part of our 2022 Sundance Film Festival coverage.*

Though many people would like to forget their high school years, Scottish filmmaker Jono McLeod can’t. In his new documentary My Old School, which premiered at this year’s Sundance Film Festival, McLeod assembled many of his old classmates from Bearsden Academy in Glasgow to reminisce about one very peculiar student.

My Old School starts out with many of the former students describing when they first saw Brandon Lee. He was tall, gaunt, and looked older than the rest of the 15 and 16-year-olds in the classroom. A few of them believed he was a student-teacher, not a fellow classmate. When they heard his name, many could not help but remark that he shared the same moniker with Bruce Lee’s son who passed away a few months earlier on the set of The Crow.

Despite a few students feeling uneasy about his name, Lee eventually made a positive impact on the school. He befriended bullied kids and eventually their bullies. He performed in South Pacific to great acclaim even though he didn’t want to kiss his costar, which many of the interviewees remember fondly. He studied hard and helped other students to do so. It was not until he left school with dreams of being a doctor that his life story started to unravel.

Though it may be tempting to google “Brandon Lee Bearsden Academy,” don’t. The less you know going into this film, the wilder the ride. That won’t be a problem for most viewers as the story was huge in Scotland, less well-known in the U.K., and pretty much unheard of everywhere else. Ultimately a true-crime film, My Old School works because of McLeod and editor Berny McGurk’s editing choices. The mystery unfolds as the students tell it, sometimes even doubling back and revealing details from tales told 30 minutes earlier.

McLeod manages to keep the story relatively light given its darker WTF moments – and there are a few. Towards the film’s end, the tonal issues become more and more apparent. In the documentary’s final moments, something truly sinister is revealed. The tempo is immediately brought back up again over the end credits when To Sir With Love alum Lulu (who also voices one of the animated teachers) sings a cover of Steely Dan’s “My Old School.” McLeod’s old classmates are then shown giggling and acting like what they experienced wasn’t traumatic as their old school pictures pop up with the credits. The effect is jarring.

One may say McLeod gives Brandon Lee a sympathetic edit. However, My Old School is a testament to how our memories change in order to cope with horrible events. It also proves a single person’s impact on a community can be beneficial even when his intentions are less than virtuous. In its closing scenes, a few of the students talk about how Lee inspired their future careers, their love of performing, their music tastes. Hell, what would McLeod’s documentary be without Brandon Lee?