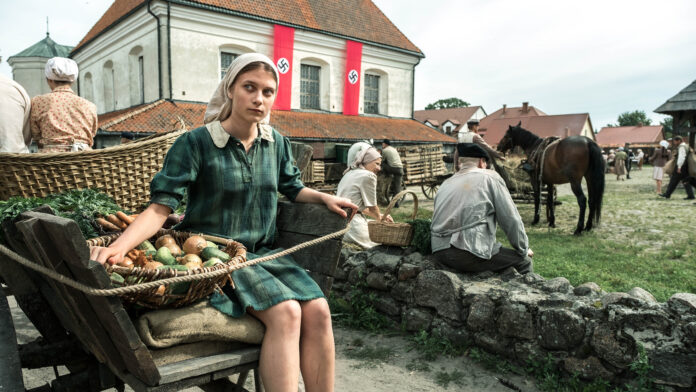 My Name Is Sara tells the true life-story of 13-year-old Sara Góralniak (newcomer Zuzanna Surowy) whose family and all the other Jews from her hometown of Koretz (located in Ukraine) have been branded and are soon to be sent off to ghettos then later concentration camps during Nazi reign. Sara is one of the two older siblings, four total. She and her older brother are sent away to the countryside where her parents have paid a lot of money to an old woman to provide refuge for the older siblings. It’s September of 1942 and at the height of WWII; the Nazis are everywhere, killing anyone and everyone who is supected as Jewish or an ally/resource to them.

Fearing that the two would be caught or turned over, Sarah flees from her brother and wades through the thick forests of Ukraine in search of food and protection. Sara finds refuge in a small village, passing as a Christian, she is reluctantly taken in by an older farmer named Pavlo (Eryk Lubos), his young wife Nadya (Michalina Olszańska) to look after their two young boys. She soon discovers the dark secrets of Pavlo and Nadya’s marriage, compounding the greatest secret she must strive to protect, her true identity.

The film is directed by Steven Oritt (Accidental Climber, American Native), written by David Himmelstein, produced by Justyna Pawlak, and executively produced by Mickey Shapiro – the son of Sara Góralniak and Asa Shapiro. He is involved in multiple charities and organizations dedicated to preserving the memory of the Holocaust, including Steven Spielberg’s USC Shoah Foundation. Mickey credits his family history as the inspiration for his philanthropy. My Name Is Sara depicts the real life dilemma of his mother’s intense and deadly journey of having to flee her home and family only to spend the next few years in hiding within a Ukrainian family.

They and other Ukrainian country folk could and would turn on her for their own survival against the Nazi’s at any time. She takes on the identity of Christian classmate Manya Romanchuk who, through studying together, taught her Christian prayers. The film has simple cinematography but holds the intensity of Sara’s eggshell circumstance as she is constantly faced with wonder, fear, and threats from all angles and walks of life.

My Name is Sara gives more historically valuable insight into one of the most devastating eras and wars that have plagued our planet since the birth of human conflict. Not only that, the film is coming out in the further devastating midst of Russians currently occupying Ukraine; essentially following in the footsteps of the bullshit Nazi regime. The acting and writing of the film was well put together but I didn’t understand the use of the English language. It was out of place for the primarily spoken languages of Hebrew, Ukrainian, and Russian for that location of Eastern Europe at the time.

For the two years that Sara was hiding within this family, the film centers more on the tempestuous web that Pavlo, Nadya, and Sara were caught in. Highlighting the flaws and secrets that we all carry but is emboldened when faced with war and almost guaranteed death. The film presents a much softer tone of WWII. However, it is riddled with sickening reminders of a time utterly macabre. Nonetheless, it’s still worth seeing.