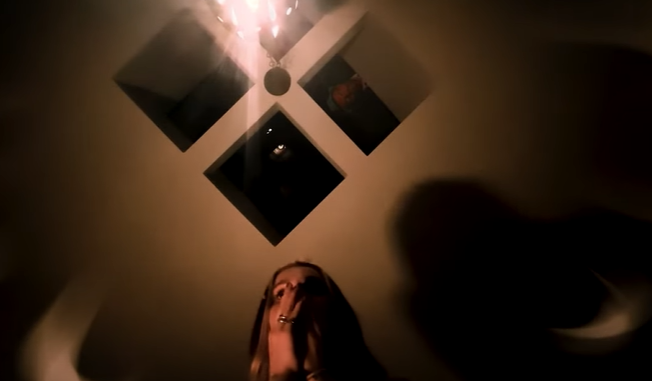 What did you do to keep yourself occupied during the early stages of the COVID-19 lockdown? Learn to bake bread? Catch up on your reading? Well, I can tell you that Jacob Estes, writer/director of He’s Watching, decided to do something a little more stimulating (and possibly traumatic) with his family, they made a movie! This movie! Lockdown films have become something of their own genre in the last few years, so that alone isn’t notable. What’s cool about this is that Estes took the opportunity to get his whole family in on the fun by casting his kids, Iris and Lucas Estes, as the leads in their film about two siblings who begin to suspect that something sinister is following them. To make things even more awesome Estes and his wife, Gretchen Lieberum, take on the role of the aforementioned sinister presence. The result? An incredibly effective addition to the found footage genre. Man….it REALLY highlights the difference talent makes. I shoot videos with my kids all the time and the result is decidedly not what anyone would call “cinematic”. As a side note here, is there some secret setting people are using for these films that are shot on cell phones? I have legitimately never seen my phone produce anything that looks as good as these movies end up looking. 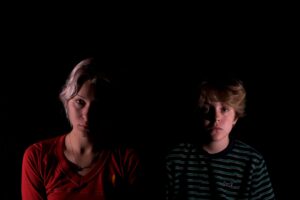 So with the backstory covered let’s dive into the film itself. He’s Watching follows to siblings, Irene and her little brother Lucas. The pair is left home alone after a pandemic which only affects adults sweeps across the country causing their parents to be quarantined elsewhere. Seems a little odd to leave these kids alone for an indeterminate amount of time, but I digress. As the two fill their days doing brother/sister stuff, playing pranks, exploring the now empty cities, etc. etc. they begin to notice that something isn’t Kosher and beginning to trend toward malicious leading to a second half that sits in stark contrast to the day in/day out of the first. 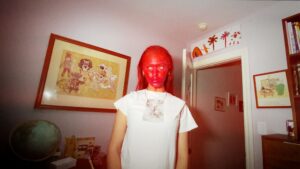 I mentioned earlier that I didn’t understand how these filmmakers who shoot on phones get such good quality, I just want to clarify. He’s Watching doesn’t look like a studio film, you can definitely tell that it was shot on cameras. Moreover you can definitely tell the skill Estes has as a filmmaker producing high quality shots though intelligent use of lighting and perspective. While there are some scenes that end up a little darker then it seems would have been intended the film as a whole looks great. In that same vein, it’s surprising just how effective Irene and Lucas are in the lead roles. Going in I expected the performances to be that of two kids who’s dad just asked them to make a movie to distract from boredom. That’s definitely not what we got, the film lives and dies on these two and their ability to hold the audiences attention and make you believe their apprehension and terror and hold your attention they do. 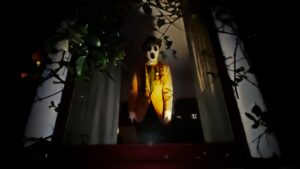 While a good chunk of the scares throughout He’s Watching could be pulled from the “Hollywood Guide To Horror Movie Scares”, there is a sizable percentage of the film that brings originality to its scare tactics. More importantly those “standard issue” jump scares (quick shots of a person in the mirror, doors slamming, etc) are done well and timed perfectly. There’s nothing wrong with going with a classic as long as you execute correctly and Estes obviously knows how to do just that. 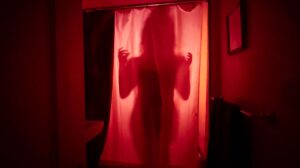 While this film won’t end up in the upper echelon’s of found-footage horror I definitely think that He’s Watching is a worthy addition to genre. What sets this apart from the dime a dozen found footage releases we see every year is the motivation behind the thing. It’s clear that Estes put a story first, then decided to make the film. It’s a genre that’s rife with people seeing it as a gimmick for a quick cash grab, but when it’s used by a skilled filmmaker with honorable intentions it can deliver some of the most genuine scares you’ll see on film.

When happy-go-lucky siblings Iris and Lucas (playing fictionalized versions of themselves) are left alone while their parents recover from an illness, a series of playful pranks they play on each other escalate when they start receiving unsettling images and videos on their phones. With the incoming messages becoming increasingly nightmarish, Iris and Lucas realize something sinister has taken root in their home.