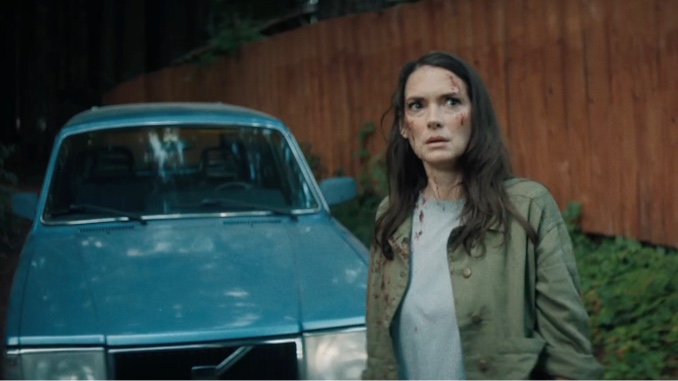 A recurring joke in Gone in the Night is that Winona Ryder is old. Mentioned over and over again by her character’s friends, boyfriend, and even acquaintances. Never mind that Ryder is one of the most strikingly beautiful people in the world, it’s a gag you can see coming when levity is needed in Eli Horowitz’s cerebral thriller.

Ryder plays a hortoculture professor, Kath, who is dating elder millienial Max, seems to be content in their oftenone-sided relationship. When we first meet them, they are bickering about the Spotify playlist and Max’s carefree attitude as they drive up to a remote cabin in the California wilderness. When they arrive to their Air BnB in the middle of the night, they find it has been double booked by an intense younger couple (Owen Teague and Brianne Tju). After a super flirtatious get to know game betweent the four of them, Kath wakes up the next morning to find that her boyfriend supposedly ran off with Tju’s Greta.

We see her a few weeks later, having accepted being dumped but still curious over what happened to Max. When she decides to look into it at a friend’s urging, Kath calls the homeowner Nicolas, a scientist turned Hermit after his father’s death from cancer. He helps her try to find Max and Greta, leading her around the city. This is where Horowitz starts to play with the film’s form. He cuts back and forth between the present and Max’s past to put together a non-linear time of what happened to him.

Ryder’s performance is more grounded and less “crazy lady” than in Stranger Things or Destination Wedding. Through finding Max we see Kath process what happened to her and her own mortality. She’s fun to watch and carries the film in a way we have not seen from her since the 90s.

John Gallagher Jr.’s performance seems one note untill he introduces other layers to the character in the flashback sequences. It’s a smart but unsurprisong move from one of the most underrated working character actors today.

As the mystery comes to a close, Horowitz throws in some cult and light body torture that feels unearned and jarring. It gets in the way of his anti-aging thesis statement about our culture and leaves us wih a completely unsatisfying open ending. However, by taking our culture’s obsession with youth and deaging, Horowitz has crafted a well-meaning first and second act, that is worth watching for Ryder and Gallagher Jr. alone.