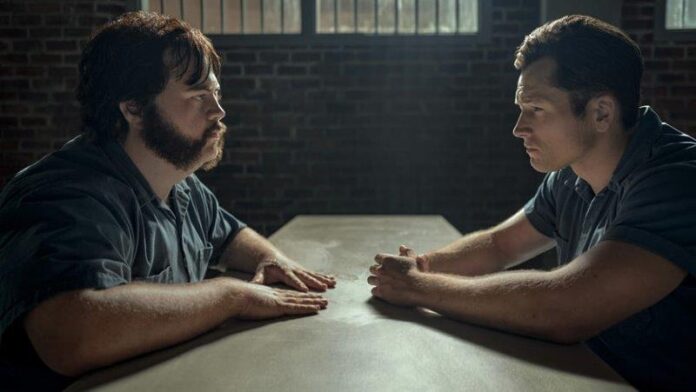 Filling in the void left by the cancellation of Netflix’s Mindhunter, Apple TV’s newest show (and stab at the True Crime genre for the phone-making streamer) Black Bird completely delivers the goods. The new Limited Series is intense, psychological, gripping, and keeps you guessing on the edge of your seat until the final episode. A fun and riveting drama complete with incredible writing, and awesome acting on the part of the co-leads.

James Keene (Taron Egerton) is a former high school football standout who was “this close” to getting into a good college and sending him NFL-bound. In the aftermath of things falling apart for him, he leans towards a life of crime. At first, selling weed at his high school. But soon enough, he’s a big-time trafficker and living a lavish lifestyle, much to the chagrin to his former police captain father Big Jim Keene (Ray Liotta in one of his final performances prior to his untimely death). He was living an extravagant lifestyle, until it all came crashing down. Busted by the Feds, James finds himself facing a 10-year prison sentence with no possibility for parole.

As he’s getting used to the prison lifestyle, the same Feds that locked him up approach him with an opportunity. After observing that James has a natural charisma that makes many (even people in prison) want to help him and be his friend, the Feds want to use James in a sting operation. Larry Hall (Paul Walter Hauser) is suspected of raping a murdering a young woman. Larry seems to have a few cognitive and social issues that make some think he might not be the killer and instead someone who was easily manipulated into giving a false confession. But local cop Brian Miller (Greg Kinnear) and FBI agent McCauley (Sepideh Moafi) think they have their guy. But with a release challenge hearing coming, they are desperate and enlist James to go from his minimum security prison to a maximum-security prison for the criminally insane to befriend a possible serial killer to elicit a confession and locate multiple murder victims’ bodies.

If this sounds like some crazy scenario made right out of Hollywood, then you’d be 100% wrong. Adapted from the book In with the Devil: A Fallen Hero, a Serial Killer, and a Dangerous Bargain for Redemption (which was from real-life events), Black Bird is a retelling of Larry Hall, and James Keene’s relationship with him. It truly is a wild experience.

At first, Keene isn’t interested in helping the same Feds who locked him up. But after learning more about the cases (and his father’s ailing health), James decides to go “undercover” into the maximum-security jail with the intent on wooing Larry Hall to try and get a confession out of him. Now, this is no easy task. This prison is way more dangerous than the one he was ready to spend the next 10 years of his life in. He would have to charm incredibly dangerous people and befriend an incredibly dangerous murderer.

While it is no easy task, James and Larry do befriend each other, and that is where Black Bird gets intriguing and exciting. Larry (played brilliantly by Paul Walter Hauser) comes across as “slow” in his conversations. He’s easily confused and manipulated. He’s also known for confessing to crimes just to get attention. Is James sure that he’s chasing the right guy. Or is this something even worse: is he a guy who can play weaknesses to his adversary and be the one doing manipulations? Both Taron Egerton and Paul Walter Hauser play an incredibly slick game of cat and mouse with each other. Not knowing who’s lying, and who’s telling the truth and they bond.

At the same time, he is working with Larry, James is starting to look inward at his own life and his relationship with his slowly dying father. Did he make something out of his life and be a perceived failure? And is taking down this monster a good way to start on a path to redemption? Flashback to both James and Larry’s childhoods offers a perspective on each of them and how their lives led them on the paths that they ended up on.

I won’t spoil how it ends, but rest assured: Black Bird is firing on all cylinders during the 6-episode run of the series. Each episode is compact and full of tension throughout the entire episode. While the episodes will be delivered weekly, this has such a binge-able feel to it and you’ll immediately want to watch the next episode as it’s gripping. Both Taron Egerton and Paul Walter Hauser (especially Paul Walter Hauser) are delivering stellar performances and the two are paired up and getting into each other’s heads. Come Emmy time, Black Bird is sure to be a contender in the acting categories at least. Once again: Apple doesn’t care about the quantity of their Original Series, they care about quality as they have another hit on their hands.