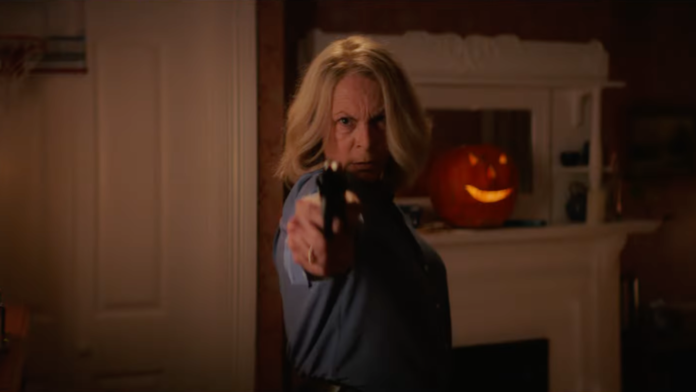 The end is hear for Michael Myers! But then, is it ever truly the end for killers like him? A spooky season treat has come early with the arrival of the Halloween Ends trailer, featuring the return of Myers in a “final” showdown with Jamie Lee Curtis’ Laurie Strode.

David Gordon Green is back behind the camera, just as he was for the previous two films in newly rebooted Halloween trilogy. Also returning are co-stars Andi Matichak as Laurie’s granddaughter, plus Will Patton, Kyle Richards, and Omar Dorsey. James Jude Courtney once again menaces the screen as Myers.

This is the 13th film in the long-running Halloween franchise that began in 1978. Green took over with a reboot in 2018 that was a runaway smash, earning $255M worldwide. The 2021 sequel Halloween Kills  wasn’t as well-regarded and made roughly half that number. So it’s a bit up in the air how this one will go over with fans.

What’s this one about? Well, Laurie gets one more shot to do the one thing that promises to put her traumatic past behind her, and that’s kill Michael Myers. How can she ever move on with the spectre looming over her?

Four years after the events of last year’s Halloween Kills, Laurie is living with her granddaughter Allyson (Andi Matichak) and is finishing writing her memoir. Michael Myers hasn’t been seen since. Laurie, after allowing the specter of Michael to determine and drive her reality for decades, has decided to liberate herself from fear and rage and embrace life. But when a young man, Corey Cunningham (Rohan Campbell), is accused of killing a boy he was babysitting, it ignites a cascade of violence and terror that will force Laurie to finally confront the evil she can’t control, once and for all.