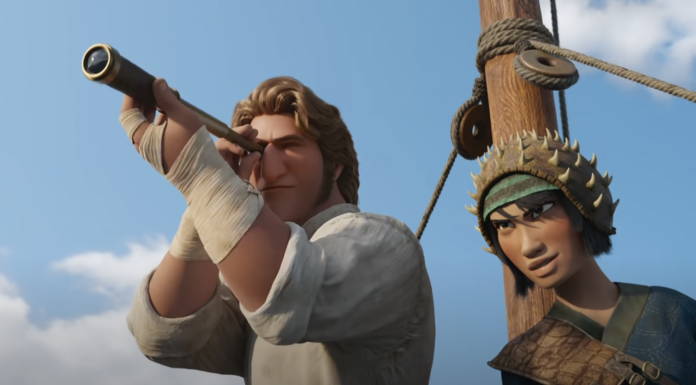 What’s worse? Facing a deadly sea monster from the edge of the world? Or caring for a precocious kid? Well, I know my answer, and that seems to be the same feeling coming from Netflix’s seafaring adventure, The Sea Beast, which has dropped a new trailer.

Karl Urban voices Jacob, a brave monster hunter who has no problem facing the world’s deadliest creatures on the high seas. However, he gets more than his match with Maisie (voiced by Zaris-Angel Hator), a young stowaway on his ship.

The film is directed by Chris Williams, known for his work on Disney’s Big Hero 6. Also in the voice cast are Jared Harris, Marianne Jean-Baptiste, Kathy Burke, and Dan Stevens.

The Sea Beast streams on Netflix on July 8th, preceded by a theatrical run the same month.

Jacob (Karl Urban) finds himself facing his greatest challenge yet: taking care of Maisie (Zaris-Angel Hator), a young girl who has stowed herself away on the ship. In addition to Urban and Hator, the voice cast includes The Terror’s Jared Harris as the fearsome Captain Crow, with Marianne Jean-Baptiste (Without A Trace), Dan Stevens (Downton Abbey), and Kathy Burke (Tinker Tailor Soldier Spy) providing additional voices.