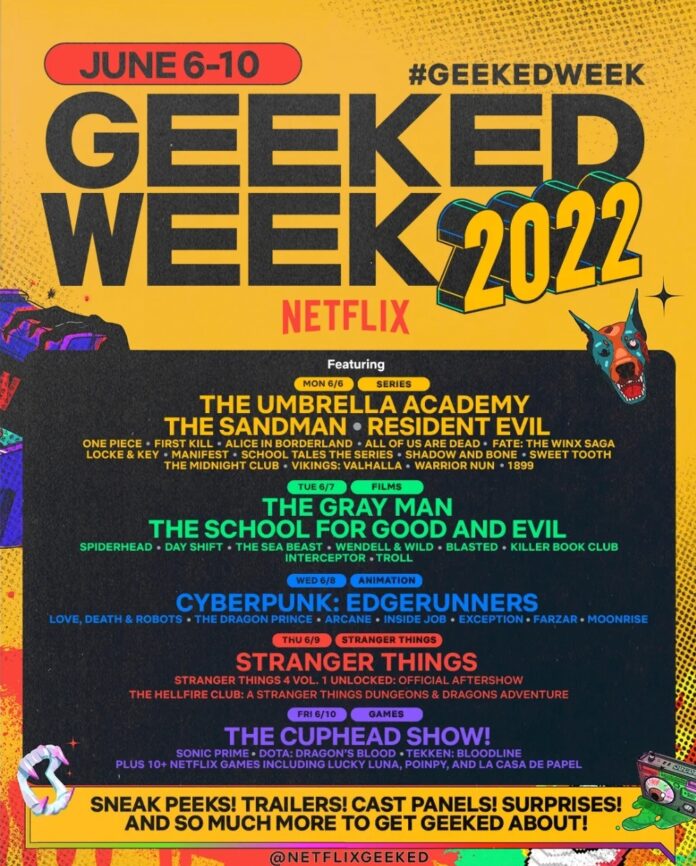 We’ve made it to Day 2 (June 7th) of Netflix Geeked Week 2022 ! Yesterday was an exciting day all about new and returning episode Series whereas today is focused on featured Films. Here’s what’s coming to Netflix:

The Gray Man is a new global action movie from the Russo Borthers is making way this summer with an all-star cast, over-the-top action sequences, and plenty of intrigue. It’s based on Mark Greaney’s 2009 book of the same name that follows a CIA mercenary, Court Gentry- aka Sierra Six (Ryan Gosling), who unintentionally learns of the agency’s dark secrets. His discovery makes him a target, and there is almost no place in the world he can hide to escape the league of international assassins, including the sinister Lloyd Hansen (Chris Evans), hunting after him.

Since the movie was announced in 2020, fans have waited for Anthony and Joe Russo’s The Gray Man after the directing duo helmed four Marvel movies, including Avengers: Endgame. Reportedly, Netflix has spent over $200 million on the action blockbuster, making it one of their most expensive productions to date.

The School For Good and Evil – Coming September 2022!

Netflix is releasing the film adaptation of Soman Chainani’s best selling Youg Adult series, The School for Good and Evil. This outstanding fantasy story follows best friends Sophie (Sophia Anne Caruso) and Agatha (Sofia Wylie) as they navigate an enchanted school for young heroes and villains as they find themselves on opposing sides of the battle between good and evil. Chainani will serve as an executive producer and Paul Feig, whose credits include Bridesmaids, Spy, A Simple Favor, and the rebooted Ghostbusters, will direct.

The School For Good and Evil will include the spectaculor cast of Charlize Theron, Kerry Washington, Michelle Yeoh and Laurence Fishburne as the School’s best and worst deans, professors and headmasters. Theron plays the School for Evil’s Lady Lesso while Yeoh and Washington respectively play the School for Good Professors Anemone and Dovey. Kit Young, Rachel Bloom, Peter Serafinowicz, Mark Heap and the Patti LuPone will also star.

And as for the rest of the students? Watch out for Jamie Flatters, Freya Theodora Parks, Demi Isaac Oviawe, Kaitlyn Akinpelumi, and Briony Scarlett.

Spiderhead – Will be released June 17th.

Based on a short story by George Saunders Escape from Spiderhead, Spiderhead comes from director Joseph Kosinski (Tron: Legacy and Top Gun: Maverick), with a script by Rhett Reese & Paul Wernick (Deadpool, Zombieland).

Chris Hemsworth, who sports an American accent for this, plays brilliant visionary Steve Abesti, who runs a futuristic penitentiary. At Spiderhead, instead of being locked up, the inmates are free to roam the stark white hallways but not before Steve tosses them into a glass room and administers some sort of drug or drugs that supposedly aid their redemption.

Two inmates, Jeff and Lizzy, played by Miles Teller (Whiplash) and Jurnee Smollet (Birds of Prey), form a connection that tests the drug-loaded method. Steve is constantly pushing the limits, as patients fight each other, writhe in pain, have sex with one another, and exhibit other increasingly chaotic behaviors. Steve watches all of this with nothing but excitement for his unorthodox methods. Makes you wonder what the hell is actually going on and why anyone would consent to essentially, being a lab rat.

Tess Haubrich plays the role of Heather (Wolf Creek) alongside BeBe Bettencourt (The Dry) as Emma and Charles Parnell (The Last Ship) as Knowles. Also starring in Spiderhead are: Mark Paguio as Verlaine, Sam Delich as Adam, Joey Vieira as Miguel, Daniel Reader as Ryan, Ron Smyck as Dave, Stephen Tongun as Ray.

Day Shift will be directed by first-time director JJ Perry who has worked as a second unit director and stunt coordinator for movies like Fast and Furious 9, The Fate of the Furious, Bloodshot and the John Wick movies. The project will be produced by Chad Stahelski and Jason Spitz for 87Eleven Entertainment and Shaun Redick (BlackKklansman) and Yvette Yates Redick (Malicious) of Impossible Dream Entertainment. The film is written by Tyler Tice and Shay Hatten.

Jamie Foxx, who is also an executive producer for the project, will star as the blue-collar dad who hunts vampires. Foxx is known for his roles in many projects including Ray, Collateral, Django Unchained and more. He won an Oscar for Best Performance by an Actor in a Leading Role in 2004 for his role as Ray Charles in Ray.

His lead role wants to provide a good life for his quick-witted daughter, but his mundane San Fernando Valley pool cleaning job is a front for his real source of income- hunting and killing vampires as part of an international union of hunters.

The Sea Beast is an epic animated adventure film which tells the story of Jacob Holland (voiced by The Boys’ Karl Urban), a legendary sea monster hunter whose life is turned upside down when a young girl, Maisie Brumble (Zaris-Angel Hator), stows away on his ship and finds an unlikely friend in a terrifying sea monster. Together they embark on an epic journey into uncharted waters and make history.

This animated sea escapade is directed by Chris Williams, who has worked on the likes of Moana, Big Hero 6 and Bolt. More voice starring talents include Jared Harris as Captain Crow, Marianne Jean-Baptiste, Dan Stevens and Kathy Burke.

Netflix is developing a new animated dark comedy feature called Wendell & Wild which reunites Keegan-Michael Key and Jordan Peele as two scheming demons. The brotherly duo enlist the aid of 13-year-old Kat Elliot, a tough teen with a load of guilt, to summon them to the Land of the Living. But what Kat demands in return leads to a brilliantly bizarre and comedic adventure like no other, an animated fantasy that defies the laws of life and death, all told through the hand-made and brilliant artistry of stop motion animation.

Wendell & Wild is directed by Oscar nominee Henry Selick, whose credits respectively include Coraline, The Nightmare Before Christmas, and more. The script was written by Selick and Jordan Peele. Acclaimed Argentinian artist Pablo Lobato designed the characters and Tthe film will be produced by Ellen Goldsmith-Vein for The Gotham Group, Peele via his Monkeypaw banner and Selick.

Blasted – Will be released June 28th.

Blasted is inspired by the real-life UFO-phenomenon that’s taken place in Hessdalen, Norway. The comedy Sci-Fi film will be directed by Martin Sofiedal, written by Emanuel Nordrum and produced by Are Heidenstrøm (The Wave) at Miso Film.

The film follows childhood friends Sebastian (Axel Bøyum) and Mikkel (Fredrik Skogsrud), who are reunited for Sebastian’s bachelor party. While Mikkel never matured past teenage laser tag-prodigy, Sebastian has grown into a career-obsessed workaholic who’s using the party to schmooze a potential client. But when the bachelor party stumbles head-first into an alien invasion, it’s up to Mikkel and Sebastian to reunite as the kick-ass lasertag duo they once were and fight back.

A mysterious new Spanish slasher gives us the first look into the titled Killer Book Club (aka Bienvenidos al club) foriegn film. The official teaser introduces the cast of characters who will presumably be knocked off in the slasher film with Netflix noting that “no one is innocent in this club.” The Criminal Book Club is a Spanish-language slasher adaptation of the novel by Carlos García Miranda.

Directed by Carlos Alonso-Ojea and with a script by Miranda, The Criminal (Killer) Book Club stars Veki Velilla, Álvaro Mel, Priscilla Delgado, Iván Pellicer, Ane Rot, Carlos Alcaide, Hamza Zaidi and María Cerezuela. According to Netflix’s caption text for the trailer, the mysterious youngsters will cross paths in their reading club with noneother, a creepy clown.

Killer Book Club release date may be end of 2022 but is still TBD.

Interceptor is an action packed film that stars Elsa Pataky (wife to Chris Hemsworth). Given the film’s previous release, Pataky goes behind the scenes with stunt coordinators and shows how some of the film’s many stunts were pulled off.

In the film, Pataky portrays Captain J.J. Collins. She’s the last officer on a remote missile defense base who’s in the battle of her life against terrorists aiming 16 stolen nuclear weapons at the US. Pataky stars opposite Luke Bracey as Alexander Kessel, a former US military intelligence officer intent on carrying out an unthinkable plan. Interceptor is co-written and directed by Matthew Reilly in his film debut. Reilly is best known as a novelist and short story author.

Pataky’s behind the stunts interview of Interceptor:

Troll –  Expected to be released sometime in 2022.

Troll is another Norwegian language action-adventure fantasy film in the works that will be directed by the internationally-acclaimed Roar Uthaug (Tomb Raider, The Wave). The film is written by Espen Aukan (The Games) and produced by Espen Horn (Post Mortem: No One Dies in Skarnes) and Kristian Strand Sinkerud (Mammon) at Motion Blur. Motion Blue produced another Norwegian Netflix film, Cadaver.

Troll is a gigantic Norwegian monster that’s been trapped for a thousand years deep inside the mountain of Dovre. It awakens and begins destroying everything in its path and is fast approaching the capital of Norway. But how do you stop something you thought only existed in Norwegian folklore? Maybe with a team of folklore researchers?

Netflix is set to release a feature film adaptation of the Japanese hit horrer-comedy manga series Zom 100: Bucket List of the Dead and lead stars Eiji Akaso as Akira! Akaso is most well known for starring as Ryuga Banjo aka the Kamen Rider in the beloved Kamen Rider franchise. He recently starred in the TV shows Super Rich and Kanojo was Kirei datta.  There are ten published manga volumes of Zom 100 Bucket List Of The Dead, with an 11th to be released in Japan on June 17th, 2022. The 7th volume of the English translation of the manga is due to be released in August 2022.

Written by Haro Aso and illustrated by Kotaro Takata, the manga series made its debut in October 2018.  For Akira, surviving a zombie apocalypse beats being a wage slave any day! After spending years slaving away for a soul-crushing company, Akira’s life has lost its luster. He lives in a trash-filled apartment, his pay is abysmal, and he can’t even muster up the nerve to confess his love to his beautiful co-worker. But when a zombie apocalypse ravages his town, it gives him the push he needs to live for himself. Now Akira’s on a mission to complete all 100 items on his bucket list before he turns into a zombie too.

Stay tuned for the offical trailer and date of release to drop for Zom 100: Bucket List of the Dead. 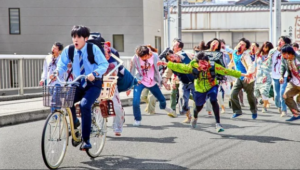 Filming is underway on Zack Snyder‘s epic ‘space opera’ Rebel Moon for Netflix. In addition to directing, Snyder is also co-writing the script with Shay Hatten (Army of the Dead) and Kurt Johnstad (300). Snyder dropped a sneak peak picture on Twitter today that gives us a tiny but delicious taste of what’s to come. (See below)

Rebel Moon is set in a peaceful colony on the edge of the galaxy that finds itself threatened by the armies of the tyrannical Regent Balisarius. Inspired by Akira Kurosawa’s cult classic Seven Samurai, Rebel Moon will tell the story of a group of farmers who inhabit a distant colony in space. When these farmers see their lives threatened by the arrival of an evil army, they send a young woman named Kora, played by Sofia Boutella, to survey nearby planets in the search of warriors who can help fight off the invaders. 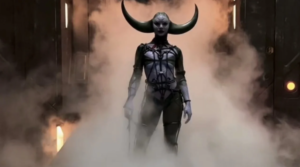