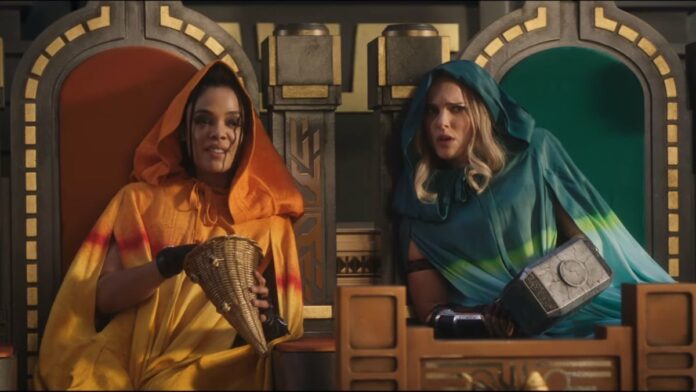 Thor: Love and Thunder definitely doesn’t need a big marketing push. It’s already one of the most anticipated movies of the year, Marvel Studios or otherwise. And yet Marvel has turned on the spigot of late, following a bunch of promos released yesterday and a new trailer that has dropped today.

Once again, this trailer is pretty short and seeks to highlight the team surrounding Chris Hemsworth’s Thor. To be fair, Marvel has so many big stars playing major MCU characters that you can’t blame them for wanting to show them off. So you’ve got Tessa Thompson’s Valkyrie, Natalie Portman who returns as Jane Foster aka The Mighty Thor, plus director Taika Waititi as Korg. Plus, the entire Guardians of the Galaxy are there.

Interestingly, in one shot we can see a pair of Celestials, the giant, all-powerful space gods last spotted in Eternals. They can be seen on Olympus, where deities such as Zeus (Russell Crowe) and Hercules run things. Will Marvel tie these movies together via the Celestials? That would be interesting.

Thor: Love and Thunder opens on July 8th, but will have its big Hollywood premiere tonight so look out for spoilers and early reactions.