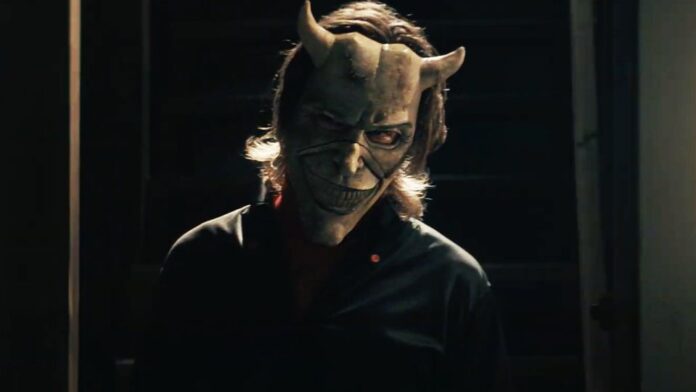 If you thought Ethan Hawke was creepy as cult leader Arthur Harrow in Marvel’s Moon Knight, you ain’t seen nothin’ like what he does in The Black Phone. By now you’ve likely seen the terrifying masked visage Hawke sports, a clever hook to lure audiences into such an unexpected performance. But it’s more than how Hawke looks in the role of “The Grabber”, a sadistic stalker of children in 1978 North Colorado. It’s the way he moves, the way he speaks, and most importantly, how frighteningly little there is to know about him.

The Black Phone is a return to horror form for Doctor Strange director Scott Derrickson. Reunited with co-writer C. Robert Cargill, the two adapt Joe Hill’s short story into a coming-of-age story for horror freaks. In a lot of ways, it’s like a minature version of It, written by Hill’s legendary father Stephen King, in the way it combines a child’s view of the world with the dangers lurking in it.

In this quaint Colorado suburb, where Little League baseball games are a town event, a dark secret is buried. Kids are disappearing left and right, snatched in the night never to be seen again. For Finney Shaw (an excellent Mason Thames), it’s something he’d rather not talk about. To talk about it makes it real, and he’s got enough to deal with. He’s bullied at school for no apparent reason; he’s got an alcoholic father (Jeremy Davies) with a hair-trigger temper; and oh yeah, he just gave up a home run to Bruce, the popular kid that all the girls are gushing over.  When Bruce becomes another victim of The Grabber, it all starts to hit too close to home. When Finney’s closest friend and protector, the double-tough Robin (Miguel Cazarez Mora), also goes missing, it all starts to feel inevitable. When will Finney be snatched, too?

But if there’s one good thing in Finney’s life, it’s his sister, Gwen (Madeleine McGraw, in a potential breakout role). She endures their father’s outbursts right along her brother, taking the brunt because she reminds him too much of their dead mother. And like her mother, Gwen also sees visions, and is extremely religious. That said, she has no problem leaping to her brother’s defense when he’s fighting a losing battle.

What’s chilling about The Grabber is how normal his abductions seem. A part-time magician, he lures kids, including Finney, near his ominous black van with the promise of a magic trick. A flight of black balloons signals his presence, not unlike the red balloon of Pennywise the Clown. Finney finds himself locked away in a soundproof basement, while his tormenter stares at him and promises never to hurt him. It’s all a game to the killer; a trick to get his captives to slip up so he can murder them as he sees fit. Finney’s only hope for survival is the disconnected phone on the wall that keeps ringing. When he picks it up, the ghostly voices of the killer’s previous victims can be heard offering him advice on how to stay alive.

This is extremely dark stuff that Derrickson is putting out there, especially for a story centered around a child. And we are reminded frequently that Finney, as tough as he might act, is still very much a child. He breaks down into tears on occasion, he makes mistakes, he makes rash decisions that someone older might have avoided. All the while, we know precious little about The Grabber. That’s what makes him so scary. His motivations don’t matter so much as his intentions, which we know are sinister.  Hawke is clearly having a ball leaning playing the type of twisted character he’s never done before. With his assortment of two-piece interchangeable masks (designed by Tom Savini!), his fluctuating cadence, and snake-like movements, Hawke embraces the role of killer with an eerie glee.

Moments of humor lighten up the mood and make this feel as all-ages as possible for a movie that really isn’t for kids at all. James Ransone is funny as a coked-out wannabe detective with a connection to The Grabber. Meanwhile, Gwen’s vulgar outbursts at the lame cops on the case aren’t just worth a laugh, they are one of the many shades to her character. Gwen finds her faith tested on many occasions, and even questions God’s existence when he doesn’t immediately come to her aid. The amount of attention paid to Finney and Gwen raises the stakes considerably because we care about them, and that doesn’t always happen with horror movies.

Hill’s short story is pretty thin and while the feature version fleshes some things out, it still feels like there’s another layer that’s missing. What The Black Phone does extremely well is capture the peril that children face in every facet of life. In the case of Finney, the threat of being beaten with a belt at home or beaten with a belt by The Grabber is ever present. These dangers can start to feel inescapable, but by leaning on our friends, our family, and a little bit of faith, they can be the lifeline to endure and grow stronger.