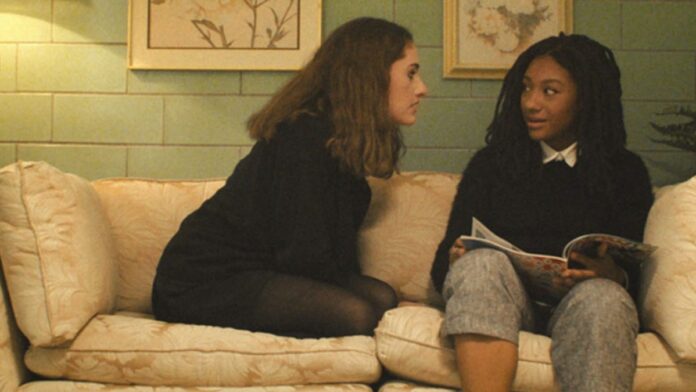 Actor Rachel Sennott is having a banner 2021 and 2022. She is not only starring in A24’s upcoming slasher comedy Bodies Bodies Bodies but delivered a standout performance in last year’s Shiva Baby. The latter film captured a selfish and directionless young Jewish woman who attends a Jewish shiva with her parents, former love, current sugar daddy, and his wife and child. Sennott’s newest endeavor seems similar on paper. Tahara takes place at the Jewish funeral of a young high schooler, where Sennott’s Hannah is preoccupied with her own selfish delusions. But what Shiva Baby lacks in subtly, Tahara makes up for in heartbreaking realism.

Don’t be concerned – Sennott’s comedic talents aren’t wasted here. She’s just as sarcastic and sardonic as you want her to be. However, Tahara’s focus is away from Sonnett’s character Hannah, instead looking at the Black, Jewish, and queer Carrie Lowstein (Madeline Grey DeFreece). When we first meet the girls before the start of the funeral service, they both seem to be on the same page– attending out of obligation and going through the motions. Hannah is slightly preoccupied with Tristan’s presence (Daniel Taveras), a boy the deceased supposedly dated.

It’s here that wrier Jess Zeidman establishes the trajectory of each girl, while both are apathetic Carrie is at least aware of other people’s feelings while Hannah wonders if she is a bad kisser. She forces her best friend to lock lips in a secluded part of the synagogue, awakening a vulnerable part of Carrie that forces her to confront her friendships, both past and present.

If Sennott is the comedic glue that holds this film together, DeFreece is the heart and soul of this film. She is never heavy-handed with her performance, instead riding on the highs and lows that every teenager does. The little ways she moves her mouth to convey Carrie’s emotion alone shows what a master this young actor is already.

Though Tahara has a low-fi quality to the cinematography, director Olivia Peace tells this simple story of friends growing apart in a dynamic way. She utilizes an aspect ratio similar to what one may find on Instagram. This completely changes when characters are kissing, switching to animated sequences, literally widening the character’s worldview. In under 80 minutes, Tahara is one of the most innovative coming-of-age films in recent years – altogether laugh-out funny, unquestionably relatable, and quietly heartbreaking.