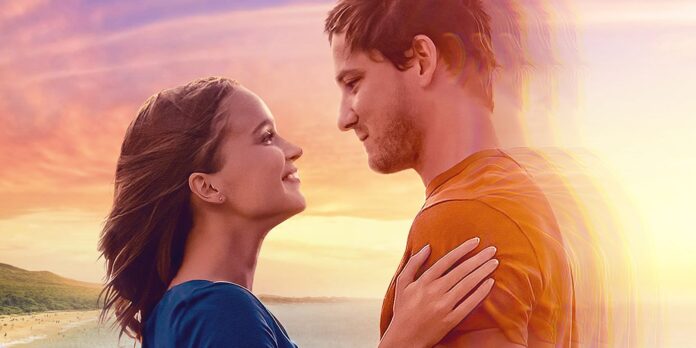 There’s a reason why movies use the mixtape as a tried and true expression of love. A good song has the power to take you places, to overwhelm you with emotions of a particular time, a place, or a person. The creation of a mixtape designed to capture the spirit of someone cared for is more than just a declaration of love, it’s acknowledgement that you completely understand them and they you. It’s just not the same making a Spotify playlist, y’know? Well, in the passionate sci-fi romance Press Play, a Walkman (whippersnappers are like “What’s a Walkman??”) and a mixtape literally take a grieving young woman on a nostalgic journey back to the person she loved and tragically lost.

It’s a catchy premise, to be sure, one that will satisfy genre fans looking for a bit of youthful romance to go along with their time travel mumbo-jumbo. While the details are slightly undercooked, the lead performances by Clara Rugaard and Lewis Pullman (looking and sounding more like his old man with each performance) will win over skeptical viewers, of which I was definitely one going in. Set on the gorgeous beaches of Oahu, the story centers on aspiring artist Laura (Rugaard), whose dream of building a career from her talent has distracted her from building lasting personal relationships. However, that all changes when her best friend Chloe (Lyrica Okano) introduces her to Harrison (Pullman), her stepbrother and employee at the local record store. This store is special for a couple of reasons. First, it’s a record store when we all know those don’t really exist anymore. What’s an album? And two, the owner (Danny Glover) keeps a wall of memories, a collection of mixtapes left behind by customers who hope they find their way into the possession of people they once loved.

A bit on the nose? Well, maybe, but then this is a story by The Fault In Our Stars filmmaker Josh Boone, and subtlety isn’t on the menu. Laura and Harrison hit it off, slowly at first, with her love of pop band Japanese Breakfast and his agreement to join her for a concert. He’s awkward, a bit corny, and values the tangible feel of a cassette tape or record album over streaming ease. Credit to Boone and director Greg Björkman’s commitment to building their relationship meaningfully, so that we’re willing to stick around when things start getting wonky. Surfing trips and acts of encouragement bring them together, culminating in a beautiful moment painting a romantic mural in a place special just to them. They fall in love, and he sets aside his plans to attend medical school on the east coast to stay in Hawaii and support Laura’s artistic career. She’s hesitant, but he’s insistent. Tragically, he’s killed in a freak accident shortly after this decision is made.

It takes a while to get there, but the story actually gets moving when Laura is reunited with Harrison’s mixtape to her four years after giving it away. Now when she puts on her earbuds and listens to it, the music takes her back to a special memory with Harrison. After briefly freaking out, she realizes this is an opportunity to save him, only to discover that rescuing her lost love won’t be so simple.

Like the worst time travel movies, Press Play becomes overwhelmed by the mechanics of it all, and trying to explain why everything makes sense. This comes at the expense of the romantic chemistry and intense connection that made us want to see Laura and Harrison together in the first place. The same can be said for all of the supporting characters at this point, with Laura and Chloe’s friendship becoming a plot device rather than anything substantial.

The music, which pulls from YA favorites including the aforementioned Japanese Breakfast, guides the emotional beats without going too heavy-handed. And Björkman wisely uses the natural Hawaiian landscapes to create the perfect canvas for Laura’s creative gifts.

Press Play isn’t breaking any new ground. Its themes of living life to the fullest and making the most of the time we have are familiar, yet muddled as so many things are. But its ruminations on love, loss, and nostalgia are fully expressed by the trio of Rugaard, Pullman, and Okano whose performances are the soothing soundtrack this messy romance needed.