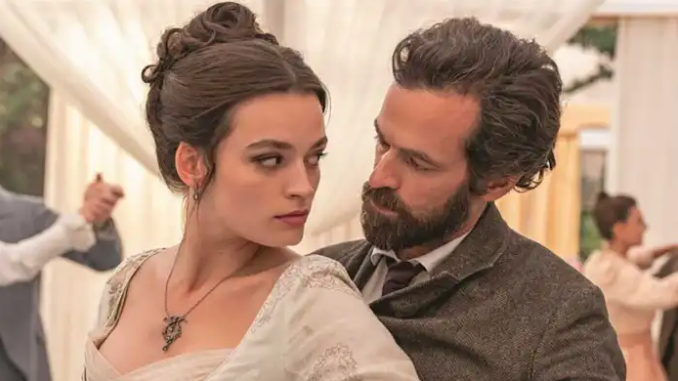 Eiffel is a French (with English subtitles) film freely inspired by forbidden romance centered around the 19th Century and infamous engineer, Gustave Eiffel. Previously titled Eiffel in Love, Director Martin Bourboulon and writers Caroline Bongrand, Thomas Bidegain, Natalie Carter, and Martin Brossollet team up to bring together visual and emotional beauty of a love story loosely inspiring the reason and drive behind his crowning home achievement, the Eiffel Tower.

Having just finished his collaboration on the Statue of Liberty, celebrated engineer Gustave Eiffel (Romain Duris) is definitely enjoying his respected success. However, the French government is insistent that he design another grand display in preparation for the 1889 Paris World Fair. Eiffel, having just completed the Statue of Liberty, was thinking something less complex but just as progressive by designing and constructing a subway. Everything changes for Eiffel, when he’s invited to an incredibly lavish dinner party and crosses paths with a gorgeous but mysterious woman. The moment their eyes meet, instant sparks fly with their reminder of the precious life they had once shared. It’s in later conversation at this very party that Eiffel, frustrated by the stiff upper lip of French society’s desire to be separated by class, declares a plan for his next project. A long lost hidden passion reignites his soul and it inspires him to change the Paris skyline forever.

Romance, Passion, the friggin’ Eiffel Tower and it all takes place in what is globally recognized as the ‘City of Love’-  Paris, France. Throw in chocolates and champagne and it’s literal pure perfection. The chemistry between Eiffel (Duris) and Adrienne (Emma Mackey, Sex Education, Death on the Nile) is so good that I really wanted this love story to be true, aside from all the sad stuff. After the dinner party, the film dives back roughly 20 years into the story of how Effiel and Adrienne meet. Their torrid love affair is cruelly cut short and both had seemingly moved on. Adrienne (Mackey) has returned but being many years later, is married to one of Eiffel’s University classmates, the influential and famous journalist Antoine de Restac (Pierre Deladonchamps).

Problems mount for Eiffel as the first part of the tower is being built. On top of competeting for Adrienne’s love- workers went on strike, accessing funds for this project were slowing down, he’s getting bad publicity from the press, and an entire community is worried that his project will fail. He’s in a mess that could ruin everything and time is running out. Eiffel conveys a decent balance of forbidden love intertwined with a cheeky but fun tale inspiring the rise of this now widely recognized and highly respected gothic tower. I absolutely love the sets and costumes and the cinematography was put together well. All these elements mix perfectly well with a decent narrative that although it is not as effective or historically accurate as it can be, is able to caption the heart, soul, and the many sacrifices that lay within the roots and land of Paris ‘The City of Love’ France.

Eiffel opens in US theaters today only.