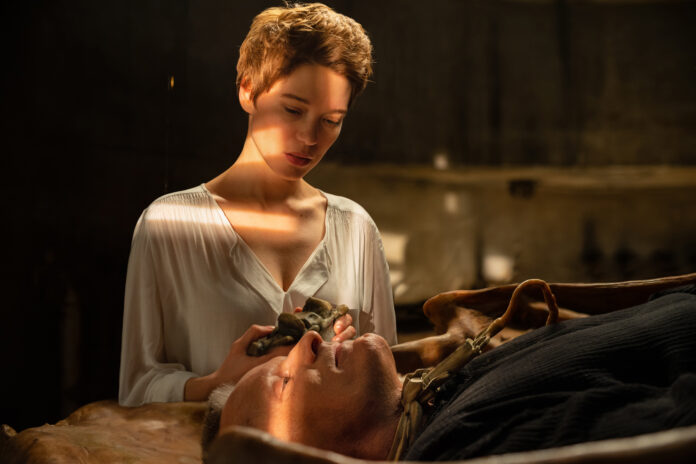 David Cronenberg is finally getting weird again! No, really, the man we most closely associate with body horror hasn’t actually ventured into the sci-fi/horror realm since 1999’s EXistenZ. His latest, the starry Crimes of the Future, definitely fits the weirdness bill and is grotesque in ways we expect from Cronenberg, but its shapeless structure and plodding narrative dulls a unique, strangely sensual exploration of the lengths people will go to find new forms of pleasure.

Viggo Mortensen stars as Saul Tenser, a man whose body grows extra organs at a rapid clip. He’s not alone in this. The human body has changed with the passage of time. Not only are more people capable of this, but most have lost the ability to feel pain. Saul, along with his partner, lover, muse Caprice (Lea Seydoux) have found their niche by turning his ability into performance art, with him as the canvas for her twisted expression. The crowds, who can’t feel pain themselves, marvel at what lays on the inside of Saul’s mutated flesh.

So where is the plot, exactly? Well, it involves Scott Speedman as a man racked by tragedy who enlists Saul and Caprice in an even darker performance. There’s also a mousy Kristen Stewart and Don McKellar as Timlin and Wippet, respectively, investigators at the National Organ Registry whose obsession with Saul and Caprice turns fanatical. These characters aren’t at all interesting, just peculiar. They’re so thin in detail that Mortensen, Seydoux, and Stewart can barely give anything to their performances. Of them all, Speedman makes the most out of his limited time, charismatically pushing forward the film’s one compelling subplot.

There’s a ton of potential in what Cronenberg lays out, but the narrative has no drive. It just lurches from scene to scene, relying on vivid, morbid visuals to be enough. In some cases, it is. The equipment Saul uses in everyday life are like living organisms themselves. His feeding chair enwraps him like a xenomorph out of Alien, mimicking his movies with scary efficiency. Another, a coffin-like autopsy table, looks like it wants to devour Saul whole.

All of this is provocoative in the moment, but doesn’t linger on the mind for very long. And yet I suspect that Crimes of the Future will become a cult favorite, regardless. Fans of Cronenberg who have longed for a return of his bold vision will find enough to appreciate, although I suspect anyone else who dwells on it for too long will find the real crime is that it’s a waste of their time.

Crimes of the Future opens in theaters on June 3rd.