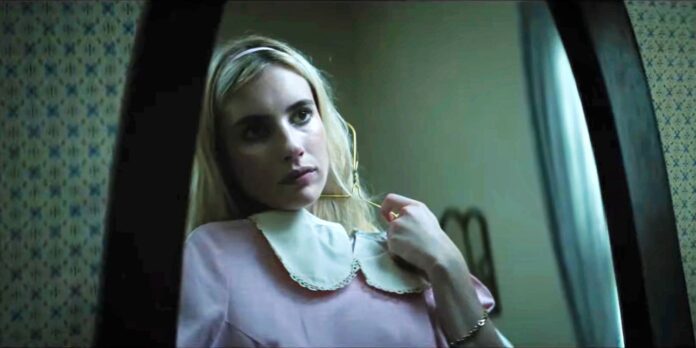 Emma Roberts, John Gallagher Jr., and most crucially Michael Shannon, make up the ingredients for a pretty good horror-thriller. At least you know the acting will be solid, and Roberts, a veteran of the Scream franchise, knows her way around the genre. Unfortunately, they all deserve much better than Abandoned, an unimaginative relic with the same old jump scares and creepy neighbors that we’ve seen from similar films a thousand times before, and that the genre has tried hard to get away from.

Motherhood is at the center of this story, with Roberts playing Sara, whose post-natal depression has led her husband Alex (Gallagher) to find them a fresh start away from the city. If you guessed “creepy country home” as their destination, you’d be correct! The large farmhouse has a bloody backstory, but the couple look past it as if they’ve never seen a horror movie before! Come on, ya’ll!

It doesn’t take long before Sara starts suffering from strange visions. Not only that, while her husband is away working as the town vet, she begins finding old photos and notes regarding the house’s deadly past. She learns that a girl named Anna committed a double homicide, killing her father and then her own baby…only there’s no other mention of the child. Sara begins to crumble and break from reality, not only from these revelations but from the stress of mothering a baby that doesn’t seem to like her very much.

In theory, compiling supernatural terrors atop maternal fears is a good idea used to tremendous effect in better, richer films. But director Spencer Squire isn’t given much to work with in terms of establishing dread or Sara’s lack of maternal instinct, or the devastating loneliness she feels, so we get tired tropes such as swarms of flies, or the “creepy” chimes of a music box complete with twirling ballerina. None of this is particularly effective.

The same goes for Michael Shannon as the mysterious neighbor Chris. Shannon is one of the best actors in the world, but I’d be lying if I said I wasn’t concerned about his recent trajectory. Always mint at playing socially awkward rejects and dangerous misfits, Shannon is nonetheless going through the motions here, playing down to the level of the generic script which telegraphs the revelation around his character from ten miles away. An attempt to add some context and foreboding in a subplot involving Alex’s euthanizing a group of ill pigs (or his fear of doing so) falls flat. Abandoned just isn’t sturdy enough to support it when everything else is so predictable, including a disappointing finale in which the filmmakers shoot for the cathartic moon and miss badly. Credit does go to Roberts for an engaging performance as the overwhelmed Sara, the desperation on her face, so often framed in a way that we cannot miss it, is heartbreaking as it turns to outright hopelessness. Put this trio of actors in another movie with greater stakes and a riskier narrative and you’ve got something special.

Abandoned is in theaters now, and will hit VOD on June 24th.