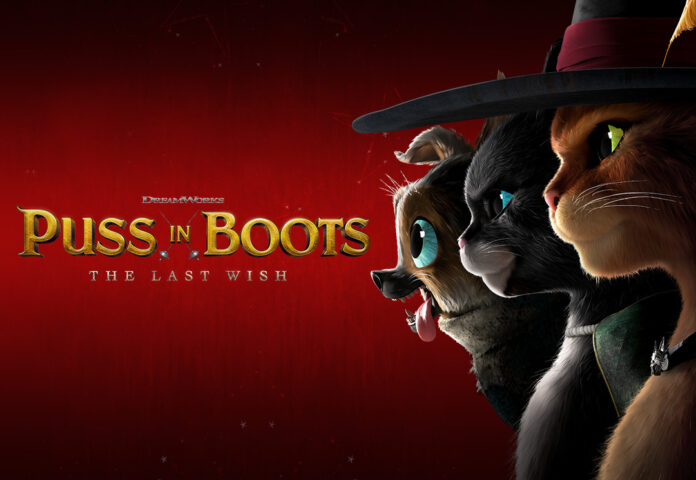 I don’t know if anyone would’ve thought when Puss in Boots debuted in 2004’s Shrek 2 that he’d become the franchise’s most enduring character. But the swashbuckling feline definitely has, with a long-running animated series that lasted six seasons, and a hit film in 2011 that made $555M. With staying power like that, Puss’ adventures are from over and we’ll see him next in Puss In Boots: The Last Wish.

Antonio Banderas returns as the fearless feline, with Salma Hayek also reprising her role as his rival and love interest, Kitty Softpaws. The story finds Puss on a quest into the Black Forest to find the Wishing Star that will return his lost lives. He and Kitty will be joined on their quest by a relentlessly happy canine named Perro, voiced by What We Do in the Shadows actor Harvey Guillén.

Expect plenty of twisted fairy tale takes, such as Goldilocks and the Three Bears crime family.

Directed by Joel Crawford, Puss In Boots: The Last Wish opens in theaters on September 23rd.

Academy Award nominee Antonio Banderas returns as the voice of the notorious PiB as he embarks on an epic journey into the Black Forest to find the mythical Wishing Star and restore his lost lives. But with only one life left, Puss will have to humble himself and ask for help from his former partner and nemesis: the captivating Kitty Soft Paws (Oscar nominee Salma Hayek).

In their quest, Puss and Kitty will be aided—against their better judgment—by a ratty, chatty, relentlessly cheerful mutt, Perro (Harvey Guillén, What We Do in the Shadows). Together, our trio of heroes will have to stay one step ahead of Goldilocks (Oscar® nominee Florence Pugh, Black Widow) and the Three Bears Crime Family, “Big” Jack Horner (Emmy winner John Mulaney, Big Mouth) and terrifying bounty hunter, The Big Bad Wolf (Wagner Moura, Narcos).