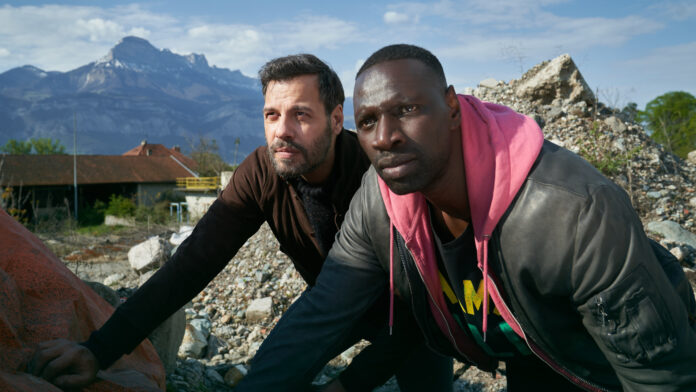 You never know what events in life can bring people back together. For Ousmane Diakité (Omar Sy) and François Monge (Laurent Lafitte), it only took the discovery of a body in The Takedown. Once partners in Paris’s Police Criminal Division, their careers have gone in different directions. Ousmane is now a Captain in the Criminal Division while Monge is a Lieutenant in the Judicial District. That isn’t for lack of trying. Monge failed his Captains exam three times and has had numerous transfers denied. While Ousmane isn’t shy about expressing that the Judicial District is a huge demotion, Monge lies to Ousmane (and himself) that he is happy. 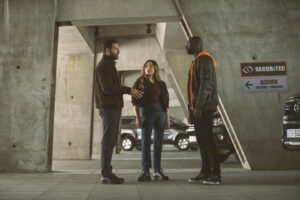 Ousmane is more than comfortable leaving their relationship in the past, but Monge has different ideas. Using his connections, he ignores Ousmane’s protests and finagles his way onto the case. The pair head to the French countryside to try and solve the murder. They are met by a local officer, Alice (Izïa Higelin), who is assigned to assist in their investigation. Alice immediately draws romantic interest from the duo, only adding a new topic for them to bicker about. As Ousmane and Monge untangle the case, it is clear that this picturesque town has darker secrets beneath the surface. Secrets that may lead all the way to the town’s controversial Mayor, Brunner (Dimitri Storoge). 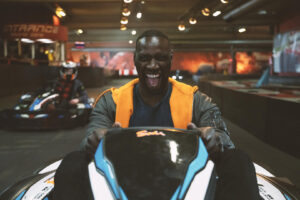 The Takedown is directed by Louis Leterrier and written by Stéphane Kazandjian. Leterrier directed numerous action hits in the early to late 2000s including the first two Transporter films and The Incredible Hulk. The Takedown is his first film in over half a decade since The Brothers Grimsby in 2016. During that time, Leterrier focused on television, including working alongside Sy in the hit show Lupin. Leterrier has been in the news recently as he was tapped to replace Justin Lin as the new director of Fast X. The Fast and the Furious franchise’s over-the-top action and humor fits Leterrier’s mold that we also see in The Takedown. The Takedown has its fair share of stylish car chases and action sequences, we’re just missing Vin Diesel. The film has a well-deserved ‘R’ rating with nudity, violence, and language in no short supply. 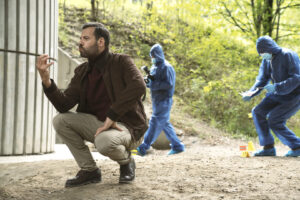 The Takedown is the sequel to On the Other Side of the Tracks with Lafitte and Sy reprising their roles. Viewing the original is not necessary to be able to watch and enjoy the sequel. Lafitte and Sy’s chemistry is the backbone of The Takedown. Ousmane follows in the footsteps of many memorable members of buddy cop duos of the past. He channels characters like Lethal Weapon’s Riggs (Mel Gibson) and most notably Axel Foley (Eddie Murphy) from Beverly Hills Cop. He has a brash “badass” attitude and aversion to procedure that rubs his superiors the wrong way. Monge, on the other hand, is more of a laughingstock amongst his colleagues, but his narcissism shields him from that. The two constantly butt heads and argue, leading to hilarious disagreements and situations. 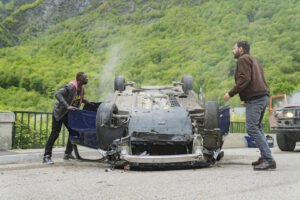 The Takedown repeatedly falls back on humor that is far from politically correct. The film has no lack of potty, racial, and gay humor. In this day and age this type of humor may be a turnoff to some, immediately causing them to sour on The Takedown. For others, it is not a deathblow and they can watch and enjoy. The film is presented in French with subtitles. Much of the humor translates seamlessly, but there are a small handful of moments where the language is a barrier and negatively effects joke delivery. Lafitte and Sy embrace the absurdity of their characters and Kazandjian’s script. Paired with Leterrier’s style, upbeat music, and cinematography create an almost graphic novel tone to the film. If you are ready to turn your brain off and go for a funny action-packed ride, then The Takedown might be just what you’re looking for.

The Takedown is available on Netflix as of Friday, May 6th, 2022.