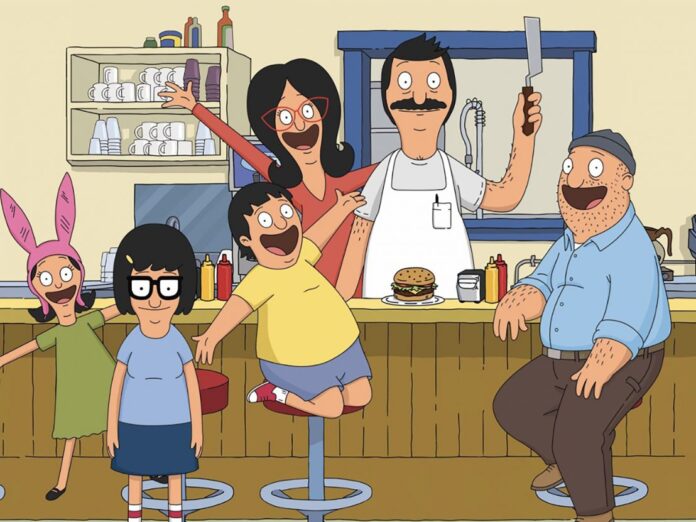 Bob’s Burgers has delighted comedy and animation fans every Sunday night on FOX for over twelve seasons. Where The Simpsons and Family Guy crudely showed a less than loving family, Bob’s Burgers showed the opposite. Sure, Bob (H. Jon Benjamin), Linda (John Roberts) , Tina (Dan Mintz), Gene (, and Louise weren’t without their quirks, but the refreshingly progressive show portrayed a dynamically relatable modern family. But do we need The Bob’s Burgers Movie?

Animated with more dimension than the show, the film adaptation starts on a cold dark rainy night at the Wonder Wharf, where a carnie is murdered. Cut to six years later and the Belchers are ready for their summer vacation. Bob and Linda hope to impress the bank into extending their loan, Tina hopes to finally tell her long-time crush Jimmy Jr. how she feels and asks him to be her summer boyfriend. Gene is excited about a new musical instrument he invented and Louise is questioning whether or not her iconic pink bunny ears need to go or not.

Unlike other tv-show-turned-films, the stakes in The Bob’s Burgers Movie don’t feel enormously high, making it feel more connected to the TV show. Everything in the film would happen in the Belcher’s normal world. Immeadiately after Linda and Bob are denied their extention, a pipe bursts infront of their restaurant, creating a giant hole and preventing any foot traffick from coming inside. In order to prove she is brave after being bullied at school, Louise decides to descend into the pit and finds a dead body. The action plays out from there – who did it, why and will the Belchers ever be okay again?

The Bob’s Burgers Movie feels like a longer version of the show. The characters team up for different storylines: Louise, Tina, and Gene trying to solve the mystery of who killed the carnie and Bob and Linda try to find a way to pay the bank. Sprinked throughout are a few signature musical numbers. Easily the best part of the film, the creative team helmed by Loren Bouchard and co-director Bernard Derriman shine both lyrically and visually in a way they never have on the show. While the FOX animation is known for its song, they have never been this lyrically brilliant and fun.

No big celebrities lend their voices to the cast, continuing the show’s grounded feel. Paul Rudd, Sarah Silverman, Kevin Kline, and Zach Galifinakis reprise their roles from the show, keeping the focus on the reason why you are there: The Belchers. The Bob’s Burgers Movie may seem pointless because it has the same heart, hilarity, and cleverness as the show. That’s why is perfect for the fans.

Watch the trailer below. The Bob’s Burgers Movie is in theaters.