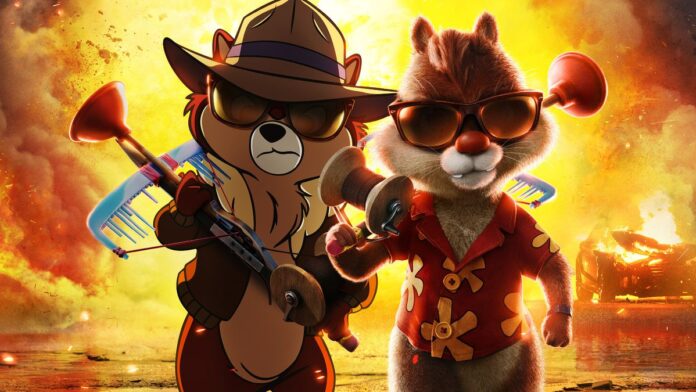 It’s funny how Chip ‘n Dale: Rescue Rangers is consistently the hook that draws me back into a love for Disney. In the late ’80s, Disney brilliantly reimagined the chipmunk pals as private investigators, who would solve crimes and mysteries with their friends, Gadget, Monterey Jack, and Zipper. The show was joined by other cartoons repurposing classic characters, Ducktales and TaleSpin. I friggin’ loved it, but the show was short-lived, cementing its status as a cult favorite. And now more than 30 years later, the Rescue Rangers are back and this isn’t just another lame revival lazily relying on nostalgia. Part action movie, part buddy comedy, part Who Frames Roger Rabbit redux, it’s one of the most clever uses of legacy characters and one of the funniest movies of the year.

Chip ‘n Dale: Rescue Rangers reimagines the classic series as an actual TV show that Chip (John Mulaney) and Dale (Andy Samberg) were the stars of. The film takes us back to their first meeting as kids in school, the only chipmunks surrounded by other, larger cartoons and some humans, too. Years later, they set out to Hollywood together and struggled to make it as actors until landing the series gig. But when Dale finally gets his moment to shine in a James Bond-esque show of his own, Rescue Rangers is canceled and the two former friends go in separate directions. Chip gives up on acting to sell insurance, while Dale sticks with it in hopes that nostalgic fans will demand a reboot.

A clever reminder of their old pal Monterey Jack’s addiction to cheese (the stinkier the better!) reunites the estranged duo. When he vanishes and is feared a victim of “bootlegging”, the process of altering a popular cartoon then forcing it into bad movies, Chip and Dale come to the rescue like the rangers they are. But they have to navigate a surprisingly seedy underbelly of animated icons, many of which are from the dustbins of Disney history, and some from completely different studios altogether. It’s very Roger Rabbit in that way, and you’ll see some pairings you never would’ve thought possible.

The film is part of what seems to be a trend for studios to imagine their vast library as a connected cinematic universe. We saw that recently in Space Jam: A New Legacy. Rescue Rangers has more fun with the idea, creating a world that acknowledges Disney as this multimedia juggernaut that can create huge stars but also leaves some in the dust. There’s a great couple of scenes with discarded or canceled characters, including the ugly first version of Sonic the Hedgehog that fans rejected (remember that?), Tigra from the Marvel cartoon, and others. Great stuff. Dale, who has had CGI surgery to spruce himself up, stands in visual contrast to the flatly-animated Chip. Sometimes when you have CGI, animation, and live-action together the look can be jarring, but those moments are few. You’ll be too busy seeking out the hundreds of background sight gags, anyway (one of my favorites, a Lego Miserables billboard). Personally, I was just hyped to see Chip and Dale back in their old garb; Dale rockin’ the Magnum P.I. gear, and Chip who stumbles into his old school Indiana Jones outfit quite unwillingly.

Unfolding like the Disney version of Hot Fuzz, the film is full of action and humor in equal doses, but it’s not a satire. Director Akiva Schaffer (of Lonely Island fame just like Samberg) and screenwriters Dan Gregor and Doug Mand are relishing in a love for buddy action movies, and all of the familiar beats are there, the biggest that Chip and Dale are complete opposites who just can’t get along well enough to be partners. Whoever came up with the idea to take these classic genre tropes and add a Disney spin deserves a raise.

To give away all of the cameos would spoil some of the fun, so I’ll leave that alone, but suffice it to say there are loads of them. The main human role belongs to Kiki Layne as LAPD detective Ellie Whitfield, a devoted Rescue Rangers fangirl eager to join on the case. Seth Rogen, JK Simmons, and Keegan-Michael-Key absolutely kill in their over-the-top voicework, and Eric Bana’s Aussie accent is perfect for this version of Monterey Jack.

Chip ‘n Dale: Rescue Rangers is so much more than I expected, and now Disney has messed up because I’m going to need more of these. Quickly. While I don’t want to see the show return on a weekly basis, the Rescue Rangers team is back, better, and they can’t disband again now. My only regret is that we couldn’t see this on the big screen. It’s good enough to get a theatrical release and I’m hoping Disney will realize that, even if it’s for a limited run.