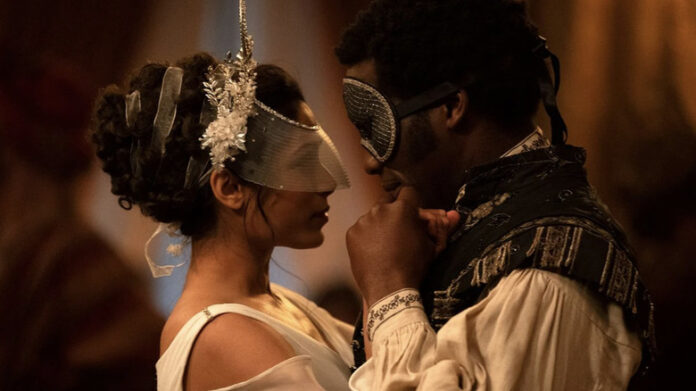 Between the staying power of Downton Abbey, the hit series Bridgerton, and films such as EMMA, refined historical romance dramas are as popular as ever. But let’s be honest in that cultural diversity isn’t really their thing. That changes with Mr. Malcolm’s List, an opulent regency drama that gives the genre a modern spin.

Starring Freida Pinto, Zawe Ashton, Ṣọpẹ́ Dìrísù, Oliver Jackson-Cohen, Ashley Park, and Theo James, the film began life as a novel by screenwriter Suzanne Allain. After turning up on The Black List, it was discovered by director Emma Holly Jones to develop a short film, which led to it being turned into a feature.

Here’s the synopsis: When she fails to meet an item on his list of requirements for a bride, Julia Thistlewaite (Zawe Ashton) is jilted by London’s most eligible bachelor, Mr. Malcolm (Ṣọpẹ́ Dìrísù). Feeling humiliated and determined to exact revenge, she convinces her friend Selina Dalton (Freida Pinto) to play the role of his ideal match. Soon, Mr. Malcolm wonders whether he’s found the perfect woman…or the perfect hoax.