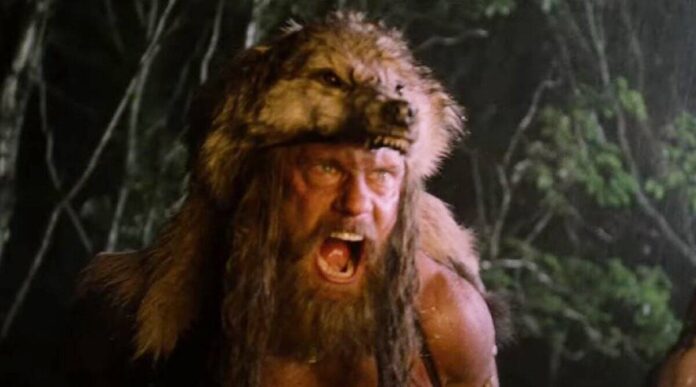 When I think of The Witch and The Lighthouse director Robert Eggers, “accessible” isn’t the first word that comes to mind. He’s not the type of filmmaker that one expects to make a mainstream blockbuster flick. And yet, Eggers has surprised me with his latest, The Northman, a brutal revenge tale that straddles the line between arthouse and mainstream entertainment. It’s a Viking epic unlike anything we’ve seen since Nicolas Winding Refn’s awesome Valhalla Rising, and I’d put this one right up there with it as the best this particular subgenre has to offer.

Alexander Skarsgard was born for the role of Amleth. The Nordic actor has always been a physical specimen since his time on True Blood, but never anything quite like this. He’s absolutely jacked, looking every bit the bloodthirsty Viking spirit of vengeance his character will become. But we first meet Amleth as a young boy, raised into the warmongering ways through his father King Aurvandill (Ethan Hawke), and mother Queen Gudrún (Nicole Kidman). But merrymaking over newly conquered lands is brief, as the boy is forced to grow up quickly when a betrayal leads to tragedy. It’s the boy’s first harsh lesson about the world, and the responsibility that comes with being on the throne.

The grown-up Amleth is an absolute beast. Years have passed and he’s ignored his boyish vow of revenge, until fate and an ill prophecy set him back on the path. But this isn’t a straight-forward slash ‘n burn affair, although Eggers and co-writer
Sjón could’ve satisfyingly gone that route. There’s actually quite a bit of stealth and tension involved, as Amleth poses as a slave so that he can strike at the right moment. It’s during this time that he also meets Anya Taylor-Joy’s Olga, a resourceful witch and fearsome in her own right. This is an intensely masculine film, but the women are as deadly as any man. What strikes you while watching The Northman is how visceral the whole thing is, savage and animalistic in its fury and sexual passions.

You can tell Skarsgard and Eggers have been itching to make a movie just like this. Adapting the Scandinavian folk tale of Amleth, a large influence on Shakespeare’s Hamlet, Eggers has delivered something truly special; an epic wrapped in myth and fire and blood. Technically impeccable, the haunting visuals by cinematographer Jarin Blaschke recall his work with Eggers on The Witch and The Lighthouse. But the range, the scale is so much larger, enveloping you completely in this unsparing Berserker world. The action is incredible, as well. The camera sweeps seamlessly across an unstoppable Berserker raid, where the men pillage and slaughter everything in their path, stopping only long enough to capture the women like spoils of war. Some of the killing will make your stomach turn, with Amleth performing some gruesome acts of murder on his path for payback.

It’s a surprisingly rich role for Skarsgard. His Amleth is a complicated man and not just a heartless killer. We see tender moments between him and Olga, but also conflicting emotions when it comes to his mother. Speaking of which, Kidman is fantastic here in what appears to be a fairly simple role in the beginning. But once the action gets going, Kidman’s role expands into something much more complex, making Amleth’s quest more difficult than he’s prepared for. I was also surprised by an almost unrecognizable Claes Bang, who play Amleth’s treacherous uncle Fjölnir. I had never realized how tall Bang is, making him a physical force opposite Skarsgard, something that comes in very handy in the volcanic final clash. Disappointing is that we don’t get more of Willem Dafoe as the Fool, or Bjork in her first role in more than twenty years. Her scene is pivotal but as a fan I really hoped for more.

The Northman is an incredible, unrelenting experience that is so perfectly an Eggers movie. All of his films have his stamp all over them, nobody is making movies like him right now and I hope he keeps being given this level of freedom. When the end of the year comes around I wouldn’t be surprised if Focus Features runs this one back to remind people just how great it really is.

The Northman opens in theaters on April 22nd.