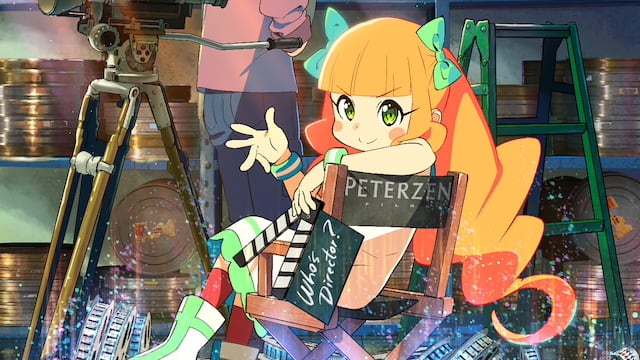 I love everything about Pompo the Cinephile. The anime adaptation of Shogu Sugitani’s  manga is an exuberant, frenzied celebration of all-things filmmaking. And while it’s definitely childish in some ways, perhaps aiming at a younger audience of future lovers of cinema, the film is not without perspective. So when mega-producer Joelle Davidovich “Pompo” Pomponett tells her film geek assistant Gene Fini that “As long as the lead actress looks attractive, it’s a good movie”, we know it’s a shot at movie studios that cash-in on flash rather than substance. Pompo, a prepubescent power player in Nyallywood (basically Hollywood), has never made a bad movie. So Gene is keen to take it to heart when she says that all movies should be 90 minutes in length, and that happy people are anathema to the creative process, thus incapable of making good movies.

It’s that last idea that leads Pompo to make a rash decision in naming Gene the director of her latest film, “Meister”. She sees in him the kind of outsider who would sit at the movies all day to escape the harshness of the real world. She sees in Gene someone who has run away from life, and to her, such people create rich inner worlds. Pompo is indeed insightful. But Gene does have a certain thirst for the world’s natural beauty that he believes movies capture better than anything else.

“Meister”, about an aging composer and a farm girl who becomes his creative muse, is silly and the kind of overwrought drama that would probably get tons of Oscar nominations, deservedly so or not. Pompo the Cinephile has fun with this idea, like it does everything else in a kid-friendly way that is just infectious. The sheepish Gene will direct, getting to work with Brando-esque legend Martin Braddock, and aspiring actress Nathalie Woodward, who Pompo casts despite throwing her out of the audition for being unable to act. But again Pompo sees a certain sparkle in the girl’s eyes, basically the opposite of what she saw in the smitten Gene.

In its own hyper-stylized way, Pompo the Cinephile tackles topics that Fellini and other greats have grappled with. As the production kicks into gear, Gene is forced to grapple with his artistic vision, who he’s making this movie for (himself, the producers, or Natalie), and of course, his lack of self-confidence. His puppy dog crush on Natalie morphs into an obsession to complete the perfect film for her, but makes this decisively a movie about him and not her journey as an actress, which is disappointing. It would have been a much more fulfilling story if it had remained a trio of arcs; the director, the actor, the producer, all trying to do something great and overcome challenges.

Director Takayuki Hirao makes terrific use of the animation in capturing Gene’s awe at being part of the Hollywood machine, but also his fanatical dedication to it. When he first meets Braddock, the superstar acting legend radiates with Dragonball energy that would make Goku cower in fear. As Gene locks himself in the editing booth to wittle down 70+ hours into 90-minutes, burning the midnight oil until he nearly dies from lack of self-care, he literally starts taking a samurai sword to the job, slicing and dicing like Jyubei from Ninja Scroll. A nifty little bit has Nathalie by his side, the first-time actress watching in tears as her debut role is cut to ribbons.

Pompo the Cinephile is a joy. Yes, it’s silly, immature wish fulfillment stuff but so what? It’s more enjoyable than the heavy-handed dramas that have tackled the poor plight of the struggling movie director. I don’t know about you, but I’ve seen that movie enough. Give me Gene and his katana-slashing filmmaking techniques, Pompo and her pixie-ish antics and fly-by-the-seat-of-your-skirt managing style, and the world of movies as truly where anything can happen. And all in a brisk 90-minutes.

Pompo the Cinephile is open in theaters now.