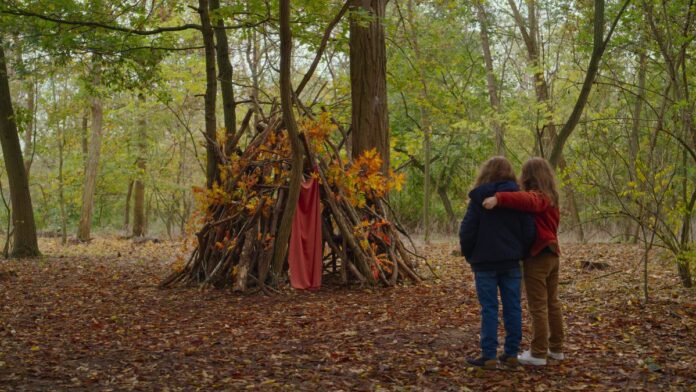 Everything about Petite Maman is small. Its lead actors. Its runtime. Its scale. However, its emotional impact is mighty.

After losing her grandmother, 8-year-old Nelly (Joséphine Sanz) and her family go back to her grandmother’s house to clean it out. Her mother is understandably sad, struggling to connect with her daughter. In some ways Nelly is like the adult, making sure her mother is fed and talking about her childhood.

One day everything becomes too much for her mother and she leaves. That same day Nelly comes across another 8-year-old girl, Marion (Gabrielle Sanz), who looks strikingly similar to herself. They play and build a hut in the woods behind her grandmother’s property. It isn’t until they return to Marion’s house that Nelly realizes that somehow her new friend is really the younger version of her mother.

Writer/director Céline Sciamma is no stranger to exploring woman and girlhood on screen. However, this is her first film since her 2019 international hit, Portrait of a Lady on Fire, and expectations are high. Luckily, Petite Maman can stand on its own.

Sciamma rests the entire film on the shoulders of sisters Joséphine Sanz and Gabrielle Sanz. Both lack the typical child actor quality where their performance is over the top and melodramatic. Instead, both play their respective characters with understated realism, rare for child actors. Both look like cherubs and yet Joséphine brings an immense sadness to Nelly.

Helping the girls along is Sciamma’s straightforward dialogue. Nothing is said for the sake of sentimentality making the film’s final scene more powerful for how grounded it is. There’s a line young Marion says to Nelly after the latter confesses she thinks she is at fault for her mother’s depression. “You didn’t invent her sadness,” she replies matter-of-factly. The sense of innocence yet complete wisdom that radiates through the scene is breathtaking and one of many gutwrenchingly powerful moments. All in all, Sciamma has quietly created one of the most quintessential movies about childhood.

While the subject matter and tone are totally different from Portrait of a Lady on Fire, Sciamma proves her mastery over visuals in this film. Her framing is impeccable making the intimate setting of Nelly’s grandmother’s house feel huge. Her transitions are even better. Once it is established that she can go back in time, Sciamma switches back and forth at the drop of a hat, while still keeping the narrative intact and confusion at bay.

A lesser director would pull out all the stops when following the international success of something like Portrait of a Lady on Fire. Sciamma daringly decides to dial back her choices, creating a beautiful portrait of growing up and grief. With each film, she seems to get more and more sophisticated. If we are seeing something nearly flawless in Petite Maman, Sciamma has a long, bright future ahead of her.

Petite Maman is in theaters. Watch the trailer below.

‘Petite Maman’ Trailer: ‘Portrait Of A Lady On Fire’ Director Céline Sciamma Returns With A New Drama About Loss And Friendship