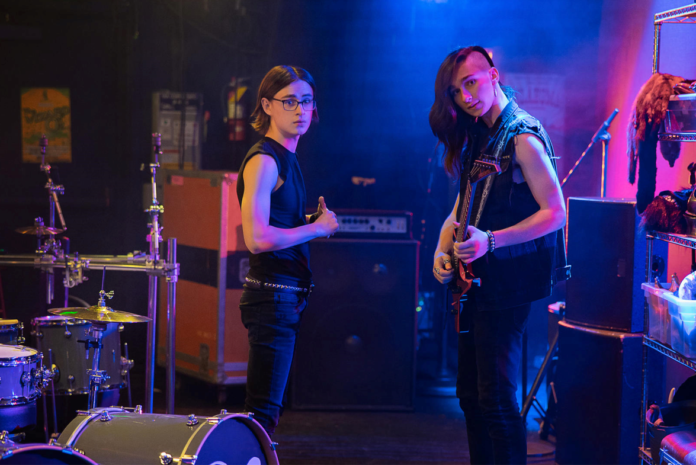 For Hunter Sylvester (Adrian Greensmith) heavy metal is more than a genre of music in Metal Lords. It is a way of life, a guiding principle and thought process that he tries to embody. Channeling the heavy metal legends he grew up worshiping, Hunter tries to shred it on the guitar. With visions of grandeur, he convinces his best friend Kevin Schlieb (Jaeden Martell) to create a heavy metal band named Skullf*ckers. Hunter can be persuasive, almost like a cult leader – putting thoughts into Kevin’s head. Thoughts like playing drums for a band when Kevin doesn’t have the most extensive drum training. He plays the drum, yes singular drum, in marching band. It wasn’t his love of music that drove him towards marching band, it was his hatred of PE. It also wasn’t his love of heavy metal that brought him to Skullf*ckers, it was his relationship with Hunter. 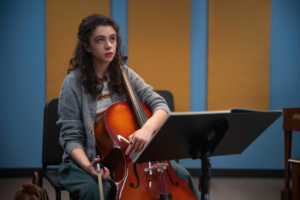 The two of them have been best friends for years. Hunter and Kevin are like peanut butter and jelly. Hunter is loud, abrasive, and gets in everyone’s face. Kevin is quiet, reserved, and seems to just be in the background. When the Battle of the Bands rolls around, Hunter finally sees the opportunity of a lifetime for Skullf*ckers. Only a few things stand in their way…equipment, talent, and only two people being in the band. First step, Guitar Center with Hunter’s father, Dr. Sylvester’s (Brett Gelman) credit card. Next is practice, practice, practice. The third piece falls into place when Kevin stumbles upon Emily Spector (Isis Hainsworth) practicing cello. What could be more heavy metal than a cello player joining their heavy metal band? If you ask Hunter, anything, anything would be more heavy metal. 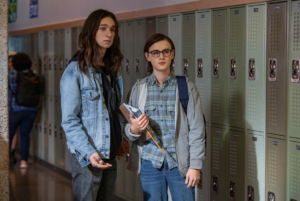 Metal Lords is directed by Peter Sollett and written by D.B. Weiss. Sollett is well-versed in high school angst and drama having directed Raising Victor Vargas and Nick and Norah’s Infinite Playlist. However, Metal Lords is Weiss’s feature-length debut, after being half of the controversial duo behind HBO’s Game of Thrones. Both do an admirable job and manage to create an entertaining coming of age story. Weiss’s script has a few truly funny moments, but Metal Lords would’ve benefited with a touch more humor. In a film with music at its heart, the soundtrack couldn’t be more important. Luckily Ramin Djawadi knocks it out of the park. The music seems to flow in every scene, helping drive the film as it drives Hunter’s soul. Kevin’s narration throughout also helps progress the story and add a touch of humor and heart. We see his maturation and growth and that helps us bond with the character. 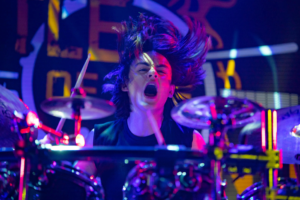 For a movie about heavy metal, where Hunter constantly waxes philosophically about being anti-establishment, Metal Lords takes the safe route. That is not to say it isn’t enjoyable, it is, but there is a touch of irony there. The film is entertaining and flows well, yet there was a chance for more. A chance for Metal Lords to stand out in a crowded genre, but instead it falls in line with the masses. The acting throughout was solid and believable. The performances along with the atmosphere created by Sollett & co. draw you into the story. Sollett and his team successfully capture the teenage spirit. All of the emotions and irrationality, while at times tough to watch, are spot on for that period in one’s life. While Metal Lords doesn’t reinvent the wheel, there is enough heart and music to make it worth a watch…and listen.