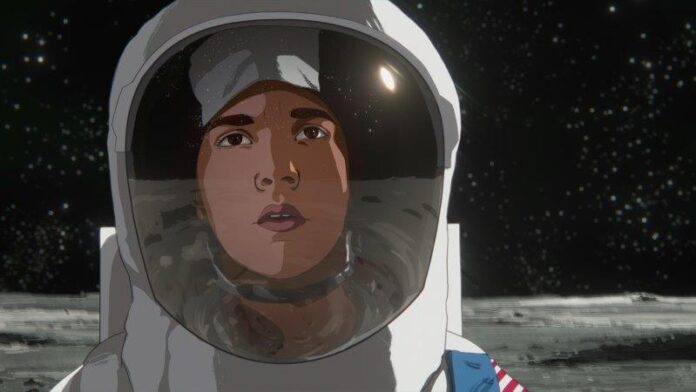 The Space Program used to be a source of national pride here in the states. As the “space race” heated up between the US and Russia, Kennedy demanded we set foot on the moon, and when we did it changed the game for the country. Suddenly the world felt a little smaller, more connected, and the idea of exploring the stars no longer seemed like something out of science fiction. Since then, our interest has waned a bit. The Space Shuttle program has been retired, and many of our domestic and international problems have taken priority. Director Richard Linklater wants to take us back to that time in the 60s, when everyone was focused on NASA and getting to the moon in his latest Netflix film Apollo 10 ½: A Space Age Childhood.

While Linklater primarily does live-action films, Apollo 10 ½ delves into animation. Because the film focuses on the past, he brilliantly used animation similar to rotoscoping (like he did in Waking Life and A Scanner Darkly) to give the film an aged feeling. And Apollo 10 ½ is all about the past. The film focused on an imaginary scenario (or was it really real?) where a young boy named Stanley (narrated by Jack Black as an adult) was recruited by NASA to be a part of the first unofficial mission to the moon. In this film, the original shuttle was incorrectly sized and could only fit a child. So under the cover story of a ”summer camp,” Stanley was put through astronaut training at NASA as he would actually be the first person to travel to the moon. While we do get to see what it would be like for a child to journey through astronaut training, Apollo 10 ½ really is a nostalgic look at how life was growing up in the 1960s.

In the middle of Stanley’s training, a freeze-frame transports the viewer to live during that time. The Vietnam War was happening, hippies were starting to become “troublesome,” the television was becoming more popular (especially when TVs started to have color), and young kids were having the times of their lives. We’re talking pre-internet, pre-cable, hell, it was even pre-seatbelts. In those days, there were only a few channels, and they turned off late at night. It’s okay to drink while driving, but don’t get drunk. It’s almost a time from another world. To be a kid during that time took creativity to have a good time, and through Stanley’s retelling of his childhood, it seemed like the best time on earth for him. Baby Boomers will particularly have a great time with Apollo 10 ½ as it will feel like a trip down memory lane. In fact, there will probably be a few moments throughout the film that will instantly cause them to pause the film and then explain it to their grandkids with excitement. It will also be interesting to see how younger audiences will receive the movie. It might actually cause some people to look up that period in time with curiosity.

Although Apollo 10 ½ is done in animation, it was shot in live-action and then the performances were animated. In addition to Jack Black’s voice, there were plenty of great performances throughout the film. Glen Powell, Zachary Levi, Josh Wiggins, Lee Eddy, Bill Wise, and countless others star in Apollo 10 ½. The animation rendering these actors’ real physical presence is spot on. In addition to the technical and performance achievements in the film, it has some sharp and honest writing. There is a moment that explores how even with all this national pride over the space race and the Apollo mission, there was poverty and racial strife. It’s actually great that Apollo 10 ½ didn’t just be a revisionist view of the 60s, and people of color didn’t have such a great time during that moment in history, and the film honestly reflects that sentiment in a cleaver way.

Richard Linklater truly shines as director when he’s telling coming-of-age stories. Apollo 10 ½ feels like the “boyhood” film that Boyhood was meant to be as it deeply and intimately showcases how it was to grow up in a different time. A time when life wasn’t so busy, and while it had its problems, it was simpler. Under the backdrop of the moon landing, Linklater has managed to find a way to deliver a deeply intimate and personal story about life in a different era and still be an incredibly entertaining film.

Apollo 10½: A Space Age Childhood is currently streaming on Netflix.