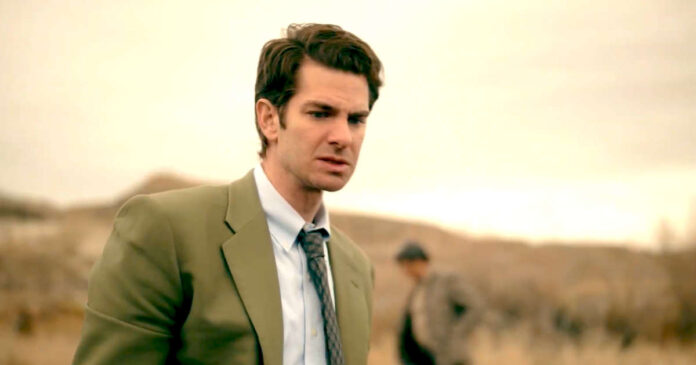 It doesn’t matter who won the Oscar for Best Actor, Andrew Garfield had the best 2021 of anybody. Following his Oscar-nominated performance in tick tick…BOOM!, a little thing called Spider-Man: No Way Home, and an underrated turn in The Eyes of Tammy Faye, Garfield is on a serious roll. So what’s next? How about thriller series Under the Banner of Heaven, which pairs him up with red-hot Fresh actress Daisy Edgar Jones?

The level of talent doesn’t end there, as the series was created by Oscar-winning Milk screenwriter Dustin Lance Black, directed by Hell or High Water‘s David Mackenzie, and is based on the bestselling true-crime novel by Jon Krakauer about a double murder committed within the LDS community.

Here’s the synopsis: “Under the Banner of Heaven” is an original limited series inspired by the true-crime bestseller by Jon Krakauer, which follows the events that led to the 1984 murder of Brenda Wright Lafferty and her baby daughter in a suburb in the Salt Lake Valley, Utah. As Detective Jeb Pyre investigates events that transpired within the Lafferty family, he uncovers buried truths about the origins of the LDS religion and the violent consequences of unyielding faith. What Pyre, a devout Mormon, unearths leads him to question his own faith.