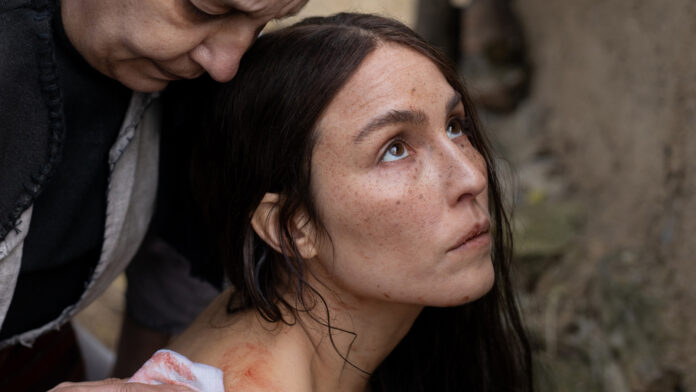 *NOTE: This review was originally part of our 2022 Sundance Film Festival coverage. You Won’t Be Alone opens on April 1st.*

The use of witches in indie horrors has grown steadily since the breakout success of Robert Eggers’ The Witch, so much so that it’s easy to look at a film like You Won’t Be Alone and wonder if it’s all calcuated. And while Goran Stolevski’s film is as steeped in folklore and ancient culture, it is an entirely new experience, one that finds the witch not looking upon humanity with malice, but with ever growing fondness, borne out of its many struggles.

I’ll admit, You Won’t Be Alone didn’t instantly grab me, thinking it to be another grim, austere horror made for the festival audience. I only signed up because of the presence of Noomi Rapace and Alice Englert, two personal favorites. Their roles are actually pretty small, albeit important, and yet there’s no dropoff when they’re not on screen, the strength of its surprisingly life-affirming story enough to carry through.

The film begins in an 19th-century Macedonian village where a new mother encounters the badly-scarred Old Maid Maria, a “wolf eater-ess” from folklore, a shapeshifter known for stealing away children. The mother begs for mercy, striking a deal with the terrifying figure not to take her daughter away until she’s 16. The witch agrees, but not without taking a bit of blood for herself, first, scarring the child. But when the time comes, the mother thinks she can be slick, and hides her daughter away in a holy cave. The girl grows up wild, with no social connections at all. The scheme fails and the girl ends up by Maria’s side, anyway, learning from her “witch mother” the grisly act of shapeshifting, which involves taking handfuls of guts to take the form of another. She also longs for her “whisper mama”, her thoughts heard in whispered voiceover.

Rapace enters the picture and instantly becomes the girl’s first victim. She plays a mother just trying to protect her child from the girl, but ends up becoming her first host body. In a disgusting display, Rapace’s body is devoured, only to be remade as the witch-girl becomes her. But this is only a physical form. She has no idea how to speak, how to act, and has no memories belonging to the woman. Because of this, she becomes a village pariah with nobody knowing what to make of what happened to her. And yet there are still lessons to be learned. The first being that women are to be quiet, “keep the gob shut”, and men to be listened to. When women are alone together they talk and laugh in quiet tones, but when the men are around they stay silent.

This lesson will stick, even as she transforms later into the man who tried to force himself upon her. That never goes well for the dude, by the way, with Stolevski unsparing in capturing the gruesome consequences. But it’s not all blood and guts; Stolevski focuses on the wide-eyed wonder and beautiful contradictions there are in being human. The witch-mother returns now and again to cast a warning, “They’ll find you out”, she warns, seemingly upset that her daughter is attempting to live among the mortals. When the girl appears to finally have found happiness, tragedy strikes and we’re left to wonder if her mother made those warnings a terrible reality.

You Won’t Be Alone holds true to its word; not only is the film about humanity and the strength gained in surviving life’s many hardships, it’s also about mothers who will not abandon their daughters to this cruel world. This might be the strangest, most ghoulish angle to present a story that is ultimately hopeful, but the spell it casts will linger and hopefully lead this sub-genre in fascinating new directions.