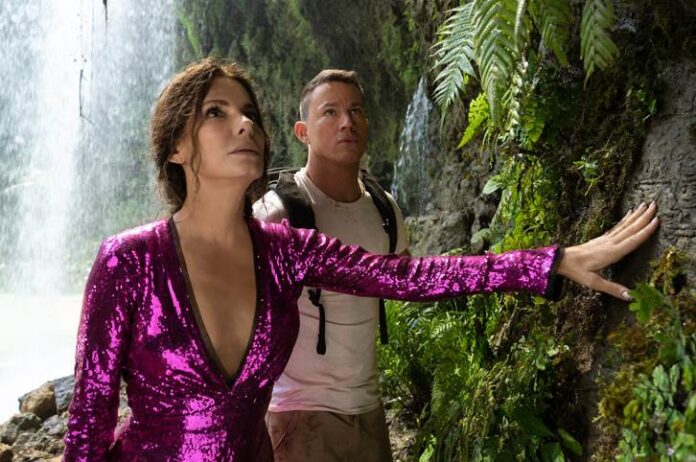 Channing Tatum’s “resting idiot face” is a national treasure. He must never lose it, nor should he go too long without featuring it as often as he does in The Lost City. Dopey Tatum is a comedic force opposite Sandra Bullock in the cliche but charming The Lost City, a romantic-adventure that borrows liberally from the Romancing the Stone playbook. I can think of worse films to take from, and don’t listen to others who say that this genre has been attempted a lot over the years. It hasn’t. Movies like Jumanji and Jungle Cruise don’t count just because there’s overgrowth and swampy water in them. A true film of this kind is pretty rare, like Six Days, Seven Nights rare. And Tatum and Bullock are pretty much perfect for it. But most especially Tatum’s idiot face.

The difference between The Lost City and those other films I mentioned? The entire swashbuckling, swooning adventure is one long meet cute. One in which the romantic duo must survive Mother Nature, creepy rich dude villains, an exploding volcano, and more. Co-writing/directing duo Aaron and Adam Nee (of the adult-aged Huck Finn/Tom Sawyer crime comedy Band of Robbers), make no bones about the lack of originality. Bullock’s character, Loretta Sage, is a bored romance novelist just as Kathleen Turner’s Joan Wilder was. She’s grown tired of the incredible success she’s found writing about her dashing hero, appropriatley named Dash McMahon, and exhausted of clingy cover model Alan Caprison (Tatum) who is beloved by fans but also sortof thinks he’s a hero himself. Years after the death of her husband, Loretta just wants to close herself off to the world. Well, the world won’t let that happen.

She’s soon kidnapped by creepy billionaire’s son Abigail Fairfax, who needs her to find ancient treasure buried in the lost city of D, on a hidden island Loretta has written about in her book. Alan, being a dimwit, flies off to save her but not before bringing along ex-Navy SEAL and expert coconut muncher Jack Trainer (Brad Pitt), who actually is a hero and can do all of the things that need to be done.

Some of the film’s best gags come early on as the chemistry between characters is being ironed out. There’s a great scene where Loretta and Alan are on stage at one of those romance novel conventions where the audience of rabid women want to see his shirt come off. Loretta just wants to bore them with details about the historicial accuracy of her novels. When Trainer enters the picture, Alan hangs around him like a goof, swatting at enemies like the weakest kid at the playground. Trainer is a badass, though, and since he’s Brad Pitt he’s also hella handsome. There’s some interesting romantic chemistry between him and Loretta that we never get to see realized. But to be fair, the movie doesn’t actually get going until it’s just Alan and Loretta trying to survive this crazy jungle romp and, of course, falling in love.

The Lost City is fully aware of what it is and that is silly, star-powered entertainment. Bullock and Tatum are clearly having a blast, and have some really funny scenes together. The best, naturally, involve Alan being dumbfounded by their circumstances, along with his complete misunderstanding of what a mummy is, a running gag that works. Why would you ever cast him in something serious when he makes such an amazing naive doofus? Bullock’s Loretta has a stick-up-her-butt, naturally, and can’t help showing off her superior intellect to Alan’s. Bullock is an exceptional physical comedian and she gets plenty of opportunity to show it off here, looking mad ridiculous in a purple sequined dress while trying to stay hidden in the dense foliage. Radcliffe is basically playing the same character he tried on in Now You See Me 2. He’s fine, but instantly forgettable as he’s not belivable at being a genuine threat. There’s not much going on for co-stars Da’Vine Joy Randolph and Patti Harrison who play Loretta’s beleaguered publisher and assistant, respectively. Both women have done so much better in the past (Randolph in Dolemite Is My Name and Harrison in Together Together) that you wish they had more to work with, but both seem to be struggling to inject some life into their characters.  Pitt is, well, he’s amazing, playing off his movie star background and encapsulating the perfect image of what readers of these romance novels think a real romantic hero is supposed to be.

Where The Lost City falters is in the scattershot script. The jokes land sporadically, at best, and there’s no sense of wonder about Loretta and Alan’s surroundings. This is meant to be an ancient, hidden land full of mysticism, ancient legend, hidden tombs, and an active volcano right at its heart. But nobody seems all that taken by it, and so neither are we. You also get the sense there was a raunchier movie buried underneath. The film’s original title, The Lost City of D, was scrapped for something much simpler and more all-ages friendly. How so, you say? Well, the “D” stood for exactly what you think it did, beause, y’know, romance readers are all horny housewives or something. A couple of jokes hint at a more randy script, but little about what we get can be considered edgy.

If we’re doing comparisons, The Lost City doesn’t measure up to Romancing the Stone which is still the standard bearer for this genre. But it’s a damn sight better than its sequel, The Jewel of the Nile! The days of the true movie star are fading, but the combination of Bullock, Tatum, and Pitt prove that they aren’t over yet. Star power and chemistry can still go a long way.