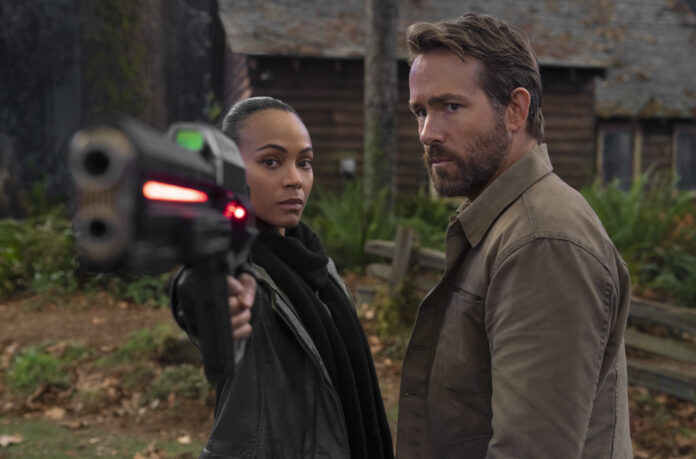 The Adam Project is a film that, early on, asks you to check the cynicism at the door. Ryan Reynolds, adding to his already-considerable Netflix canon (following 6 Underground and Red Notice), plays Adam Reed, who we meet as he’s piloting a spaceship in the year 2050, dodging laser fire and threats by his commander, Maya Sorien (Catherine Keener), to turn around. Instead, he jumps a wormhole, quipping the whole way through. It’s a tone that feels very Ryan Reynolds, with a little bit of the whimsy of The Last Starfighter. That feeling is one that The Adam Project will carry all the way through, remaining earnestly good-natured and fun without getting bogged down in wonky time travel mechanics.

As much criticism as director Shawn Levy gets, this ability to make lighthearted fun out of high concepts is something he’s long mastered, and displayed recently with Reynolds in the tremendous Free Guy. With The Adam Project, he gets to explore grief, resentment, and recovery through the lens of a family drama that never forgets to mix in some entertaining spectacle.

The premise is surprisingly deft on its feet considering how much of a mess it could be. Reynolds’ “Big Adam” crashes into the present day and ends up in his childhood home, where he encounters his younger self (Walker Scobell), who is as much of a troublemaker and smartmouth as the older version. Adam’s mother Ellie (Jennifer Garner) is struggling to connect with her son since the sudden death of his father Louis (Mark Ruffalo), a man whose scientific skills would make an impact in Big Adam’s timeline.

At first, it’s a little unclear what Big Adam has returned for. He arrives as a fugitive, bullet wound to show for it, but at first his goal seems to be to prepare his younger self for a lifetime of disappointments. Their interactions establish the angst that  Adam would carry throughout his teenage years and into adulthood, while his efforts to save little Adam from bullying show the heroic side that lurks beneath all of the jokes he uses as a defense mechanism. There’s a lot of pain that Big Adam is carrying, not the least of which is for a lost love (Zoe Saldana), who shows up for the film’s one big romantic scene and also its best action sequence. The visual effects are surprisingly good, with Reynolds using what is jokingly, and accurately, described as a lightsaber to slice up foes into ash.

It’s worth noting the script is co-written by Jonathan Tropper, whose skillful handling of dysfunctional family dynamics (This Is Where I Leave You, Kodachrome) are a big part of the enjoyment. Adam’s larger plan, which of course involves saving the future from a terrible threat, emerge but never overtake the core human interactions that are driving the story. If there are problems, it’s that The Adam Project is sometimes too simple for its own good. Keener’s villain barely registers, and the baddies that Adam fights might as well be cardboard cutouts. The film makes light of the usual time travel hazzards, but its dismissiveness is sometimes a double-edged sword. While a scene in which Big Adam secretly gives parenting advice to his mom at a local watering hole is cute, it’s so ridiculous that any emotional beat it wanted to hit gets lost. There are other scenes like this in which The Adam Project is just too clever by half.

All of that said, The Adam Project goes for big emotional swings and lands more often than not. It’s an easily watchable piece of sci-fi family entertainment not too far removed from the old Amblin formula. Reynolds and Levy are getting good at exactly this sort of thing and here’s hoping this duo will continue working together for a long time.