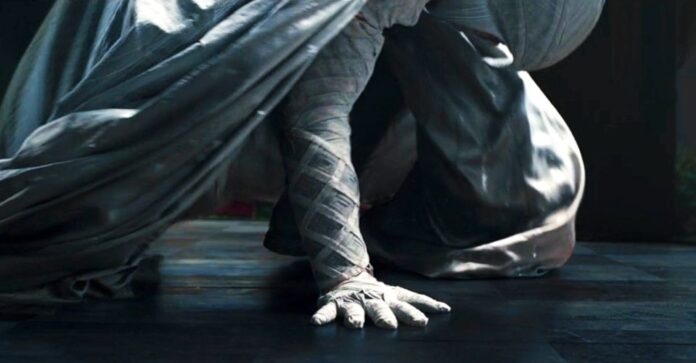 If a cool name and cooler outfit was all that’s required to launch a new superhero it would be easy to see how Moon Knight came to be. That may have been in the 70s but we’re a bit more discerning now, thankfully Steven Grant/Marc Spector/Moon Knight (that will make sense later) is much deeper then the surface slickness. A hero that almost seems made for today’s world, where we treat mental illness seriously and not as something that leaves one deserving of a one-way trip to a sanitarium,  Marvel’s Moon Knight takes the idea of a reluctant hero and amplifies it adding a healthy dose of Egyptian mythology to the mix. I’ll plainly admit that the fact this was a hero I knew little to nothing about really amped up my anticipation when those review screeners hit my inbox. Now, before we get to the meat of the show itself, I think we need to address a growing Marvel TV show problem, the release schedule. 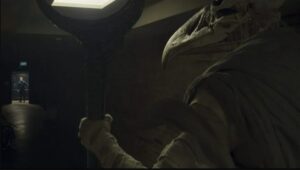 Loki, WandaVision, even The Book of Boba Fett (showing it’s not a Marvel issue, but a Disney+ problem) had some serious issues locking in viewers during the first few episodes. This coupled with the choice to do a weekly release schedule as opposed to an ‘All in one day’ drop left viewers questioning for the bulk of the series run whether the show would actually be any good when all was said and done. For the most part the final 2-3 episodes in each series redeemed the public view and left us with warm feelings of the experience as a whole, but it seems a weird strategy to leave your shows quality in question for so long of it’s life. Point being, the release schedule should not be a blanket decision but rather one that’s chosen based on the flow of the show itself. Moon Knight is no different, if you’re hoping to see the costumed vigilante you’re going to have to be prepared to wait a bit. Thankfully Marvel seems to realize this, releasing the first 4 episodes for review as opposed to the usual 3 episode preview pack, but it still didn’t quite do the trick. If only we could trust folks NOT to reveal the spoilers… Ah well.

Now that we have that out of the way let’s get to the good stuff. I knew surprisingly little about Moon Knight going into this, an oddity with me and Marvel properties. I was only aware that he looked cool, was a violent vigilante akin to Batman, had Egyptian ties, and dealt with dissociative identity disorder (DID), it would suffice to say that a lot of my assumptions were wrong. 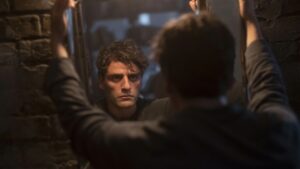 Steven Grant is a lowly museum gift shop employee who would much prefer to be leading tours through the magnificent exhibits surrounding him. Unfortunately Steven is less then reliable thanks to his other half, Marc Spector. Steven blacks out some times, putting Marc in the driver seat. This always ends with Steven coming to with no memory of what happened surrounded by chaos. It is THIS dichotomy that the series plays with the most, its not until deep into the series that we the two-some becomes a proper threesome by adding Khonshu, an Egyptian moon god, to the mix. Khonshu makes plenty of appearances prior to jumping in bed with Steven and Marc, but it begins with Steven seeing the nightmarish figure seeming to stalk him during his sleeping and waking hours. This is where the series REALLY seems to hit it’s stride, playing with the idea that Khonshu may just be another aspect of Stevens DID issues. If you had any question as to why Oscar Isaac, currently at the top of his A-list game, would take on this role you need look no further then the chance to play with a character so near a mental break. Had they cast a more “actiony” lead and not a serious actor those scenes where the two personalities come into conflict could have really fell flat.

Now, every good hero needs a better villain, and Moon Knight is no different. Arthur Harrow, played by Ethan Hawke, is Khonsu’s previous partner in cr…errr…justice. It’s revealed that the two split because Harrow’s thirst for violent eradication of evil was too much even for a vengeful Egyptian god. Hawke seems to be having some fun with the role but I couldn’t help but to feel he was holding back. We’ve seen what Hawke can do as a psychotic with no strings attached as recent as The Black Phone, but we didn’t go full-Hawke here. With the crux of the villain story being that Khonsu left Harrow for his over the top ways I would have really liked to see that displayed without question…then again, there’s still 2 episodes left for that to happen. 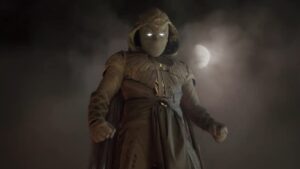 Moon Knight has some really, really solid bones and with two episodes left to be seen it’s hard to give a final judgement on the series, especially considering how much my opinion of past Marvel series has changed during the course of the final episodes. The main problem I have with the series at present is that Marvel still doesn’t seem ready to deviate from the “comic-book movie” formula in full. We get some great mythology, and some real character study but then it seems cut short in favor of the big-budget action scenes we all expect. It’s time to deliver the unexpected. If these series are going to continue to thrive they need to evolve and go all-in with different genres without the trappings of a traditional comic book show/film.

I don’t want to end this on a low note because the fact is I had A LOT of fun with the first four episodes of Moon Knight. Oscar Isaac is obviously the man for the job and the folding in of the deep mythology of Egyptian gods seems to expand the existing lore of Marvel comics and globalize the feel of this show. While we will have to withhold judgement until the series finale, I have a feeling that when all is said and done Moon Knight will be a favorite of many viewers.