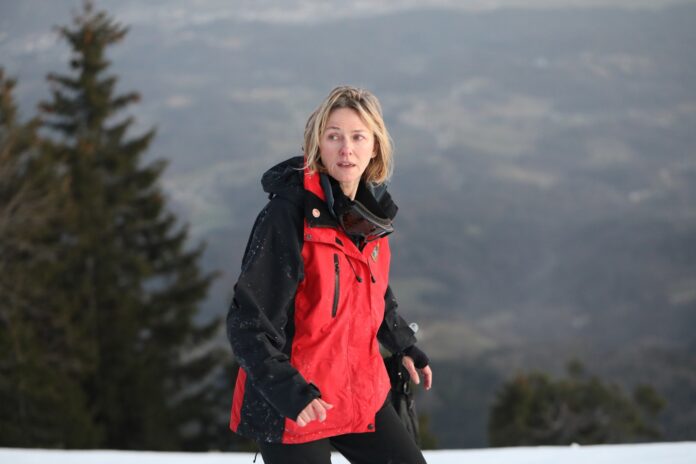 The “old man action movie” has risen in popularity recently with stars such as Liam Neisen, Bruce Willis, and Sylvester Stallone. In more recent years, post #MeToo, we are seeing the female equivalent rise. Naomi Watts is leading this new genre with her recent turns in 2020’s Boss Level, last month’s The Desperate Hour, and now her latest: the survival drama Infinite Storm.

Avoiding pain in her personal life, experienced mountaineer Pam Bales (Watts) embarks on a journey to reach Mount Washington’s summit for some much-needed reflection and contemplation. Though she knows the New Hampshire hike well, her plans are soon halted by a massive snowstorm.

Forced to turn back, she realizes that someone else has recently been up the mountain when she sees shoe prints in the snow. Their track leads her down to almost frozen and barely breathing John (Billy Howle), a moniker she comes up with herself. John is in no state to communicate and is massively underprepared with supplies, wearing sneakers and no warm clothing. As the storm rages on, Pam must use her own medical and survivals skills to save both herself and this stranger.

Screenwriter Josh Rollins uses minimal dialogue in some parts, relying on Polish directors Malgorzata Szumowska and Michal Englert to visually and sonically tell the story. Based on Reader’s Digest’s 2019 article documenting the real Bale’s rescue, both writer and directors keep the narrative relatively simple. Rollins does extract more into Bale’s backstory for Watts to work with, which in lies the problem.

In most survival movies, the natural disaster is always the metaphor for some personal barrier the protagonist must overcome internally. Often, it is more than enough visually and narratively to tell the story straight through without relying on emotionally heavy flashback scenes. Infinite Storm uses the latter approach. Instead of raising the stakes, it weighs the film down, disrupting the pacing.

Watts is more than capable to carry a diaster film like this on her own, adding to the egregiousness of the flashbacks and backstory.  Watts is at her best here acting through wordless sequences, such as the opening scene of Pam waking up in the morning getting ready for her “familiar” hike. In these scenes Malgorzata and Englert let the visuals shine. They know when to be subtle, letting Watts’ face do the talking. They also know they are telling a survival story, choosing to shoot heart-pounding action sequences without stunt doubles to raise the suspense.

Ultimately, Rollins, Englert, and Malgorzata’s urge to inject more meaning into the story detracts from the real-life extraordinary nature of Pam’s rescue and Watts’ performance. Instead of a thrilling and cathartic survival tale, Infinite Storm is a forced letdown.

Infinite Storm is in theaters now. Watch the trailer below.

‘Under the Banner of Heaven’ Teaser Trailer: Andrew Garfield Tries To Solve A Murder In Hulu’s Crime Thriller