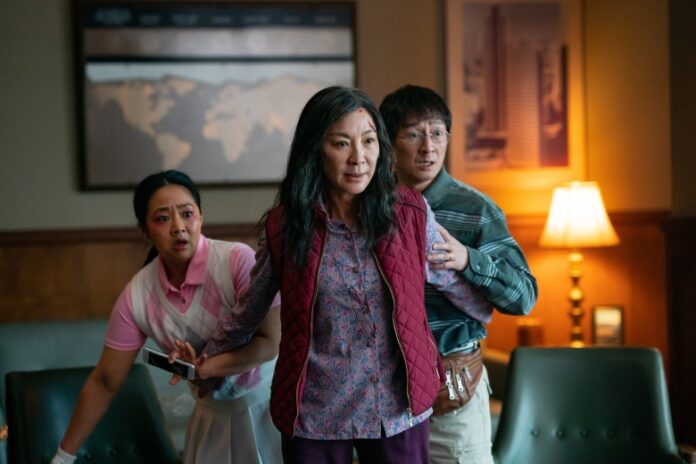 Never has a title been more apt than Everything Everywhere All At Once. This blast of pure emotionally-driven velocity is a lot to take in. It has all of the feelings, all of the kung fu, all of the metaphysical mumbo-jumbo, parallel worlds, hot dog fingers, and family drama that one could ask for. Imagine filmmaking duo The Daniels’ insane twerk-heavy video “Turn Down For What” on steroids, mixed with a healthy dose of The Matrix, The Joy Luck Club, Cloud Atlas, and Marvel Comics all rolled into one. It’s, to put it mildly, exhausting as Hell, but also life-affirming and strangely profound for a film that features characters with hot dogs for fingers.

Best of all, it offers Michelle Yeoh the most rewarding role of her amazing career. It’s a part that encompasses pretty much every side that we’ve seen her exhibit over the years, from matriarch to starship captain to ass-kicking wuxua warrior from Crouching Tiger, Hidden Dragon. She plays the fairly ordinary Evelyn Wang, a Chinese immigrant who bucked her father’s (James Hong) warning and ran off to be with her husband, Waymond (Ke Huy Quan, welcome back Short Round!), years earlier. Now they’re barely holding it together in America, running a number of makeshift businesses including a failing laundromat that is under IRS audit. Evelyn hates this life. She doesn’t connect well with her miserable daughter, the ironically-named Joy (Stephanie Hsu), a lesbian who Evelyn can barely bring bring herself to acknowledge. But most of all, Evelyn can’t stand how confinding her world is. There’s no potential, no aspiration, nothing to look forward to.

So how is this lady the last hope for all existence? The multiverse, that concept so easily thrown about about Marvel and DC alike, is at stake and only Evelyn can save it. Encountering the badass “Alphaverse” version of her weak, naive husband, Evelyn is suddenly sent ricoheting across different worlds, encountering versions of herself that might have been and perhaps still could be. In one, she might be a martial arts superstar, or in one she’s a renowned chef with a Ratatouille-esque situation, in another she’s got sausage digits that she slaps around with strict IRS employee Deirdre (Jamie Lee Curtis), only this isn’t the same Deirdre; this one’s a lover, also with hot dog digits, while another can go unhinged at the drop of a hat.

As wild and often too ridiculous for its own good as this film can get, it’s all there for a reason. Evelyn’s far-flung adventures, which reveal the many lives she could have led if other choices had been made in her life, only make the heart grow fonder for what she has right in front of her face. Sure, the entirety of existence is held in the deadly grip of an everything bagel, but she still needs to learn to accept her daughter, to make up with her fiercely-loyal, fannypack-wearing husband, and to stop fearing her father’s rejection. If the craziness is there to represent the way we all can lose our grip on what matters every now and then, Everything Everywhere All At Once has no shortage of moments that feel genuine and human. It puts you through the emotional spin cycle but the rewards are worth it.

There’s an electric enthusiasm that I felt from the cast and filmmakers that was also present in The Daniels’ previous film, the bizarre Swiss Army Man, in which Daniel Radcliffe played a corpse. I didn’t care for that one, and ultimately I’m not sure the Daniels’ sense of humor is always my cup of tea, but there’s no denying the passion they bring. Here, they pull out a Murderer’s Row of killer references, from the works of Wong Kar-wai to 2001: A Space Odyssey, to John Woo, to the Wachowskis. If some of the googly-eyed absurdism (there’s a buttplug battle for chrissakes) blunts the dramatic heft, it’s made up for by the love you can feel radiating from every scene and the performances within them.

I think everyone has a Michelle Yeoh that is their personal favorite, and chances are you’ll get to see some iteration of that here. She’s the glue that keeps this wackiness together, believably portraying so many different roles that couldn’t have anything less in common. And she takes charge of each one, showing the command she has shown in so many films for so long. Also a very welcome surprise is Ke Huy Quan as her husband, Waymond. Quan, who folks of a certain age will remember from The Goonies and Indiana Jones and the Temple of Doom, has been out of the game for years but came back for this particular role. And we’re all the better that he did, as he delivers perhaps the film’s most gut-punch of a line right at the moment it needed to happen. Also really great here is Stephanie Hsu in what could be a breakthrough role for her. To say that her part as Evelyn’s anguished daughter grows beyond any limitations is an understatement.

Everything Everywhere All At Once probably won’t be for everyone. After my first viewing I knew I enjoyed it but wasn’t sure it was completely for me, either. Upon a second look, it’s just refreshing to have filmmakers who have embraced something this weird, intricate, sincere, did I mention weird (?) that is entirely their own. I’ll always have room in my life for movies this unafraid to just be what they are. You won’t see another movie again quite like Everything Everywhere All At Once. I’m confident in promising you that much.

Everything Everywhere All At Once opens in theaters on March 25th.