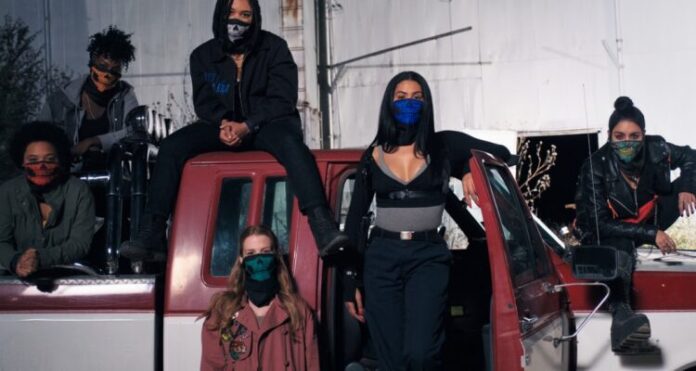 Eamon O’Rourke’s provocative but shallow #MeToo revenge flick Asking For It has enough potential that you want it to be great. I went into it hoping for the next Assassination Nation stylistically, Promising Young Woman in rage-filled ideology. Unfortunately, the film is neither edgy enough or competent enough to reach even a fraction of those lofty expectations, putting to waste a talented cast who sort of look lost as to what to do.

Again, there’s so much promise here. The film begins with a barrage of social media and buzzy Youtube videos of scumbag pick-up-artist and terrorist men’s rights activist Mark Vanderhill, think of him as Tom Cruise’s Frank TJ Mackey only more toxic. This guy has amassed a huge bro following to his Men’s First Movement that would make Joe Rogan smile, pushing such loathsome ideology as “No doesn’t mean no, it means try harder.”

Kiersey Clemons, a producer on the film right alongside Miller, plays the other side of the coin. Joey is a wholesome, perkycollege-aged young woman living with her quirky grandparents, and holding down a waittress job at a diner. She reconnects with her old friend Mike (Casey Cott), and the two hang out at a party where they get along, sharing shy flirtations and a few drinks. Unfortunately, one of them is a roofie, and Mike rapes her later that evening.

O’Rourke spares us the details. We don’t actually see the rape, only the hazy aftermath as Joey tries to piece together what happened. It doesn’t take her long to figure it out. She walks around in a daze; she’s lost her smile ,and it’s obvious to everyone. That includes Regina, played with fire and passion by the excellent Alexandra Shipp. Regina struck up a conversation with Joey at the diner and notices the change in personality. So she takes Joey under her wing and introduces her to the Cherry Bombers, her all-girl gang ready to destroy the patriarchy. Although a wide-eyed innocent compared to the others, Joey is quickly inducted into the group which is so diverse as to have been calcuated. Vanessa Hudgens gets grungy as the vengeful Beatrice, who isn’t such a fan of Joey joining their little clique. There’s also Lily (Leslie Stratton), a former pop singer now mute after a deadly encounter with a male fan; spirited trans activist Jett (Leyna Bloom), Yoda-like Native American Fala (Casey Camp-Horinek), plus troubled den mother Sal (Radha Mitchell). If that were all, it would already be a lot. But you can add in a handful of other poorly sketched-out women, a group of precocious male colleagues led by Tupac lookalike Demetrius Shipp Jr., and Gabourey Sidibe who has a cup of coffee role that feels like a called-in favor.

The plot lurches along as the group gets to know one another and tension brews between Joey, Regina, and Beatrice. But they eventually decide to take out Vanderhill and the MFM, who are basically a hodge-podge of every white male privilege rolled into one. These guys have crooked cops on their side, including a violent cowboy-like police chief; they roll with the alt-right and spew disgusting rhetoric about a culture that deifies women and minorities. Oh, and they’re also murderers and sex traffickers!?!?  It’s all just a jumbled mess when, really, any one of those things would be villainous enough. But O’Rourke in this instance decides that more is better, the same way he figures more blank-slate characters is better. Rather than actually giving us reasons to care about a few Cherry Bombers, we’re instead introduced to a whole gaggle of them, given stylized freeze-frame shots with their names emblazened. In truth, it’s about the only thing we ever learn about any of them.

The title, Asking For It, would mean more if the film had the courage of holding such convictions. The Cherry Bombers’ mass-sterilization scheme notwithstanding, there’s enough “both sides” bullshit to make any message ineffectual. At one point, Beatrice dares to attempt to rape one of the MFM dudes, only to be given a stern talking to about it. But I guess that forceful penetration is too far compared to, I dunno, killing them, which also happens. Credit to Clemons, Shipp, and Hudgens for doing their best to make any sense of who their characters are supposed to be in the midst of O’Rourke’s confusing direction. The film is strangely stagnant and muddled, with actors just sort of standing around oddly if they aren’t given dialog. Asking For It begins to look like a bunch of friends slapped this movie together in hopes of making a point they all agree on. The good intentions are clear, but #MeToo isn’t being done any favors here.

Asking For It is available in theaters now.