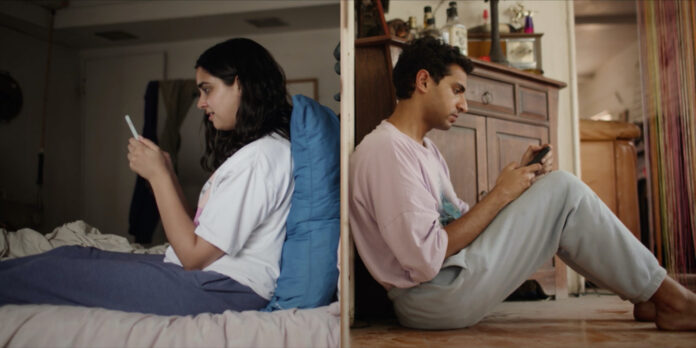 Many romances start with love at first sight, where one is struck by metaphorical lightning when they see their soulmate for the first time. Very rarely do we see love onscreen like 7 Days. One that creeps in slowly and realistically, where characters go from zero attraction to full admiration.

The film feels different from other romantic comedies from the onset. In its opening, we hear testimonials from presumed Indian married couples talking about how they got together. From matchmaking mothers to moving to America, it’s a personal touch that bookends the film and sets us up for Rita (Geraldine Viswanathan) and Ravi’s (Karan Soni) love story.  We meet them on an awkward first date, where they establish that neither drinks, their mothers set them up through an Indian matchmaking site and that they both think the pandemic shouldn’t last long.

Famous last words. The two end up having to quarantine together, and Ravi soon discovers that Rita is not so traditional after all.  Directed and co-written by Roshan Sethi and lead Soni, 7 Days should feel cliché. Instead, it has one of the freshest scripts to come out of the pandemic. Soni, who is known for his comedic work on Deadpool and Miracle Workers, brings a deadly yet grounded sense of humor to the character and to the script. On the other hand, Sethi, known for his dramatic work on FOX’s The Resident and the upcoming Call Jane, brings structure and emotionality to 7 Days’ dialogue. They balance each other out extremely well, writing and executing a relatable and biting romantic comedy.

It isn’t surprising 7 Days is so well done, as the Duplass Brothers produced it. Anything good made during the pandemic most likely has the involvement of Mark and Jay. From the equally charming –Language Lessons to the grounded HBO series Somebody, Somewhere, Duplass Brothers Productions have made the most out of their pandemic productions. Granted, they have always been the arbiters of good taste for independent projects as Mark Duplass first worked with Soni in 2012’s Safety Not Guaranteed.

Overall, 7 Days is a tight, well-made romantic comedy, with the best use of contemporary costuming I’ve seen in years. It’s no wonder it took home the Independent Spirit Award last month for Best First Feature. This may have been a quarantine project from Soni and Sethi, but here’s hoping they have a long comedic future a head of them.

7 Days is in select theaters now. Watch the trailer below. Catch our interview with Karan Soni and Roshan Sethi here.