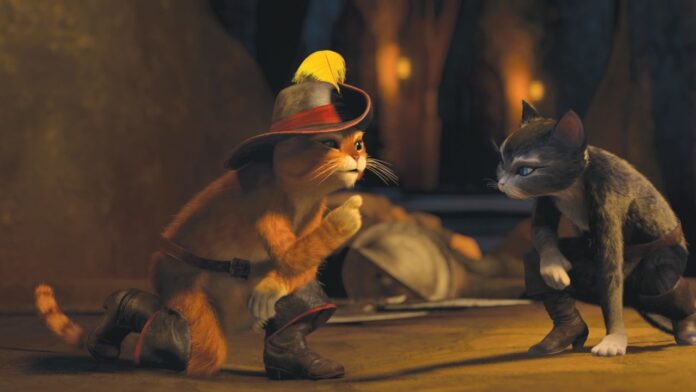 Somebody somewhere has been waiting more than a decade for a sequel to Dreamworks’ Puss in Boots, itself a spinoff from the successful Shrek franchise. And they are indeed getting more of the furry crusading feline with Puss in Boots: The Last Wish, which is gathering quite a voice cast to join the returning Antonio Banderas as the titular cat, Salma Hayek as his love interest Kitty Softpaws, and new addition Harvey Guillén (What We Do in the Shadows, Blue Beetle) as their canine companion, Perro. Deadline has released the first image featuring the trio.

The story follows Puss, who is in the last of his nine lives, on a quest with Kitty and Perro to find the mystical Last Wish that will restore all that he has lost.

Joel Crawford will direct, joined by co-director Januel Mercado and producer Mark Swift, with all three previously having worked together on The Croods: A New Age.

What can we say? He’s a charmer. In 1 day, see the #PussInBoots #TheLastWish trailer. pic.twitter.com/dk0o1CS7Vb