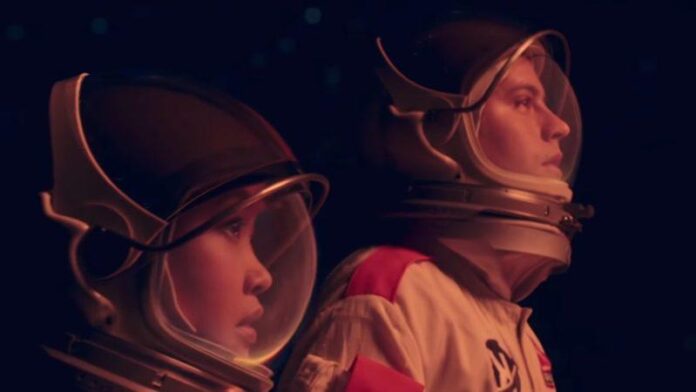 Sure, Lana Condor may have gotten her start as Jubilee in X-Men: Apocalypse, an unfortunate role that could’ve been so much more. But she broke out in a huge way with a trio of To All The Boys rom-coms over on Netflix. Viewers couldn’t get enough of watching her and the romantic entanglements she kept getting into. So why wouldn’t subscribers to another streaming service want to do the same? Only this time…in outer space?

In the trailer for Moonshot, Condor stars alongside Riverdale‘s Cole Sprouse in a rom-com set on a spaceship headed to Mars. Sprouse plays Walt, who meet’s Condor’s Sophie at a bookstore where they talk about the REALLY long-distance relationship she’s having with her boyfriend stationed on Mars. Sophie enrolls in a Mars program so she can be with him, and Walt, ever the romantic, sneaks onto the ship. To stay out of trouble, the duo have to pretend to be a real couple, and you can guess what happens from there.

The film also stars Mason Gooding, Zach Braff, and Emily Rudd. Behind the camera is Chris Winterbauer, known for his previous film Wyrm, while Greg Berlanti is one of the producers.