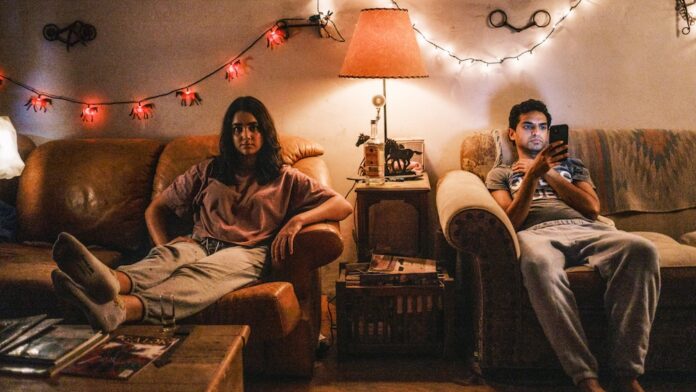 Last night at the Spirit Awards, writer/director Roshan Sethi won Best First Feature for his rom-com, 7 Days, starring Karan Soni and Geraldine Viswanathan. And chances are none of you have had the opportunity to see it. Well, that will change later this month, with a new trailer preceding its release.

Soni and Viswanathan play two mismatched people set-up on a prearranged date by their old fashioned Indian parents. What starts off as an awkward first encounter, stretches into a week-long stay as they learn more about one another and forge an unlikely bond.

The film was co-written by Soni, who most will know from Deadpool and the comedy series Miracle Workers, which he stars in alongside Viswanathan, a rising star for her roles in Blockers and The Broken Hearts Gallery. Seth is an acting physician who created Fox series The Resident.

Set up on a pre-arranged date by their old-fashioned Indian parents, Ravi (Karan Soni) and Rita (Geraldine Viswanathan) seemingly have nothing in common, making for an afternoon that, while pleasant enough, couldn’t be any more awkward. He’s conservative and clearly nervous, while she’s doing her best to politely keep on smiling. But then circumstances conspire and force Ravi to spend the night at Rita’s place. Before long, he sees that she’s not the straight-laced girl she initially pretended to be—for starters, she’s quick to pound a beer for breakfast. As their time stuck together stretches towards a full week, though, Ravi and Rita develop an unlikely bond, and in the face of a heartbreaking turn of events, that bond grows into something stronger. “7 Days” is a delightful rom-com that doubles as a showcase for its two stars, Soni and Viswanathan, both of whom carry this two-hander with natural charm and easygoing chemistry, and a culturally specific spin on its genre’s familiar tropes. Optimistic and full of heart, director/co-writer Roshan Sethi’s debut captures love in the time of isolation and will leave you on a feel-good high.