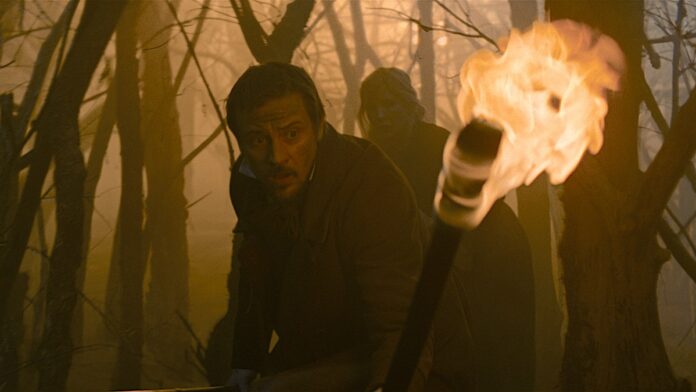 NOTE: This review was originally part of our 2021 Sundance coverage when the film was titled Eight for Silver. The Cursed opens in theaters on February 18th.

Nobody comes to Sundance looking for werewolf movies, but if there’s going to be one this is the kind you want. Eight for Silver might sound like some oblique title for an indie drama, but is actually a sly, gothic werewolf horror from Sundance-favorite director Sean Ellis. Atmospheric and haunting, it bears bloody fangs as a new style of werewolf movie, with lycanthropy as a tool of vengeance against an entire generation of colonizers.

Appropriately enough, Eight for Silver begins like few other films in the genre, swooping through a battlefield trench of masked French soldiers during WWI’s Somme Offensive. The mustard gas from the other side drifts down upon them, the fighting begins soon after, and one soldier, Edward, becomes one of its victims. There’s nothing I personally find more distasteful than a triage scene, and Ellis creates a particularly gruesome one here. Beyond the blood and death, buckets of amputated limbs sit, as if waiting for their owners to come and rummage through. It’s here that Edward is cut open, only to find a large silver bullet embedded deep within his chest.

That apparent prologue is actually just half another setup to a story that begins 35 years earlier on the French countryside. That’s where a young Edward (Max Mackintosh) in a mansion with the rest of the Laurent family: sister Charlotte (Amelia Crouch), mother Isabelle (Kelly Reilly), and brutal, distant father Seamus (Alistair Petrie). The patriarch’s work involves butchering a gypsy clan with legitimate claims on the land. A horrific display of murder follows, including a horrendous scarecrow-ing of one man. An old woman with a box of silver teeth is the last to go, but before her burial she curses the land and the people on it.

Eight for Silver is closer to Brotherhood of the Wolf in that it doesn’t focus on a single man wrestling with the duality lycanthropy brings. Instead, it positions werewolves as a plague attacking an entire community paying for the actions of a single family, who can’t be bothered to care about those who are different from them. When Edward goes missing after being attacked by what appears to be a wild animal, pathologist John McBride (Boyd Holbrook) arrives to investigate, like Van Helsing coming to slay Dracula.

It’s a very slow burn getting to this point, however, and Ellis fails to use this time to properly give us a reason to care about the Laurents. When McBride shows up, the plot takes off in earnest, however, with grisly murders shot dispassionately by Ellis, who also acts as cinematographer. Foreboding,candle-lit atmosphere casts a heavy pall, as anyone close to the Laurents, and the Laurents themselves, are stalked and slaughtered by an unknown beast.

The creature itself resembles something from the mind of H.R. Giger, a slimy, repugnant mass of teeth and claws that leaves a bloody trail in its wake. Ellis has an eye for violence, not just in the Wolfen attacks but the gypsy massacre is impressively staged. Contrary to the intimate, visceral slaughter of much in the film, Ellis shoots this mass murder from afar, letting us take in the wanton chaos of the moment. Jump scares are few, thankfully, and Ellis lingers on some of the most grotesque images to an unsettling degree, including an autopsy that makes the Aliens chest-bursting seem tame.

It’s an interesting idea taking the classic Universal monster and using it as a commentary on bigotry and class struggle, but Ellis could’ve put more emphasis on this thematic direction. As for the performances, they’re uniformly alright, but nobody, not even Holbrook who has the most to do, is given much to flesh out their characters. We know that McBride has a past as a hunter of werewolves, but where does that come from and why does he do it? There’s more that Eight for Silver could’ve been, but what Ellis gives us, a haunting, original werewolf movie with something new to say, is a bloody good treat in itself.