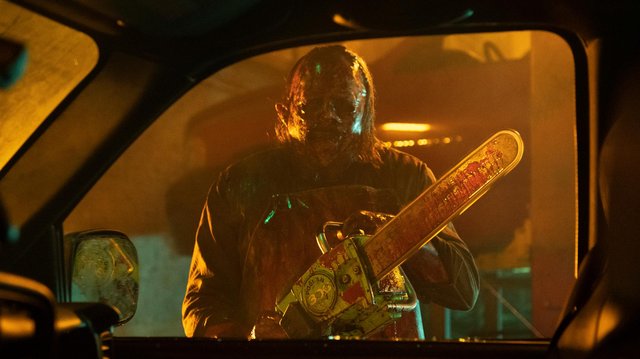 It was only a matter of time before our old chainsaw wielding friend was back. Well Netflix scratches that itch in Texas Chainsaw Massacre. The film is a sequel to the original, 1974’s The Texas Chainsaw Massacre. Decades later a group of young entrepreneurs have the bright idea to buy up real estate throughout Harlow, Texas. Two chefs – Melody (Sarah Yarkin) and Dante (Jacob Latimore) are the ones behind this genius idea. The rundown town is clearly the ideal place for young hipsters. They have it all planned out – with their new restaurant front and center. The restaurant business is a tough one to crack. Still, one has to question their culinary prowess if they need to set up shop in a deserted town hours from civilization. Dante’s girlfriend Ruth (Nell Hudson) and Melody’s younger sister Lila (Elsie Fisher) come along for the ride and big reveal. 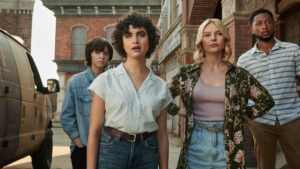 From the jump things seem off. Richter (Moe Dunford), one of the few remaining locals, is far from welcoming. The Sheriff (William Hope) is a little more so, but still nothing to write home about. Of course, both of them are more welcoming than Leatherface (Mark Burnham), who happens to still be a Harlow resident. This new influx of annoying millennials means it might be time to dust off the old chainsaw. While Leatherface is ready for the hunt, Sally Hardesy (Olwen Fouéré) has been preparing for this moment since 1974. Sally was the only one of her friends to survive the infamous first encounter with Leatherface. She’s been waiting for Leatherface to rear his ugly head again so she can get her revenge. No, I’m not talking about 2018’s Halloween, but I understand the confusion.

Texas Chainsaw Massacre is another run-of-the-mill horror that does nothing to set itself apart. Other than a few jump scares, the film is not scary in the slightest. However, there is certainly no lack of blood and gore. There are countless dismemberments and free limbs – showing that coming out of retirement, Leatherface clearly hasn’t lost his fastball. Director David Blue Garcia and screenplay writer Chris Thomas Devlin don’t waste any time with Leatherface quick to enter the equation. Granted the film clocks in at under 90 minutes, so there was not much wiggle room. Garcia and Devlin succeed in consistently progressing the film, avoiding any moments that drag. The tried-and-true formula of “tense” scene > deaths > chase > rinse and repeat is well represented. A common element in horror is the intelligence, or lack thereof, of pretty much everyone involved. Well Texas Chainsaw Massacre doesn’t disappoint. The film is predicated on the main characters trying to start a new hip community in the middle of nowhere Texas, in Leatherface’s town. If that wasn’t stupid enough for you, there’s plenty more where that came from throughout the runtime. Garcia and Devlin mix in aspects of PTSD and overcoming tragedy, adding depth to certain characters and relationships. These moments could’ve been hashed out more and come off as simply cobbled together. 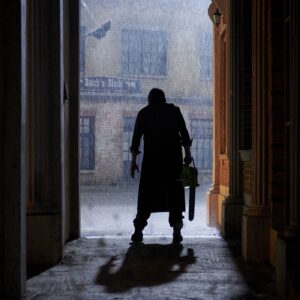