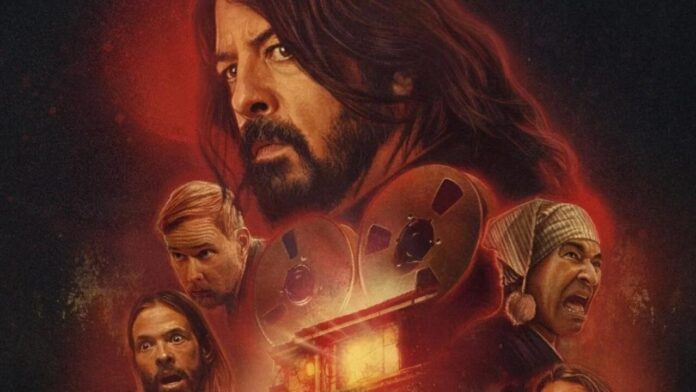 Rock band Foo Fighters is going full blast into the film industry with their new comedy and horror movie masterpiece to date. My musical heart has been a fan that stems back from the heartbreak, death, and the shroud of grief that aches for the loss of garage band Nirvana. It was a huge loss and upset for the grunge rock community until Dave Grohl, drummer for Nirvana, had broken out with his new band, Foo Fighters with a fresh flavor of music. Their new sound had brought hope and happiness in a time of darkness, even for the gothiest of goth kids. Not only had Foo Fighters birthed a post-grunge sound that we have now come to know as alternative rock but they have a degree of dark humor that makes them so much more relatable, fun, and inspirational. Over the years Foo Fighters have produced killer album after album, mentoring younger bands on getting their start, and have collaborated with other artists, including other film appearances. I’ve often wondered if and when they would make a full on film since Dave Grohl appeared in 2006 alongside another musical talent, Tenacious D (Jack Black and Kyle Gass) in The Pick of Destiny. Grohl donned the Tim Curry Devil look from the 1985 Legend film, and rocked the hell out of his ‘666’ drum set. The time has finally come. I hoped that this film was going to be funny, raunchy, and musically sick as hell and let me tell you, Studio 666 does not disappoint.

Studio 666 instantly hits viewers with a death scene with Jenna Ortega’s short lived character right out of the opening from Scream. Given the graphic brutality right from the start, I anticipated that the remainder of the film had no intentions of skimping out on some serious SFX and interesting death scenes. Sure enough, the film is riddled with nostalgic throwbacks of the late 80s and early 90s slasher/horror films like Friday the 13th and the Evil Dead series. That also may have something to do with horror enthusiast and American motion camera operator, director BJ McDonnell. McDonnell won a Telly award for cinematography and camera operation in 2008 and in 2012 he went on to direct slasher film, Hatchet III. McDonnell also directed the critically lauded live action rendition of the “Dead Island” commercial which received over 1 million hits in the first week of its release on Youtube. Finding a knack for filming music videos, McDonnell went on to write and direct for metal band Slayer for the song “Repentless”. His video gained 37 million views on YouTube which later won the “Loudwire 5th Annual Music Awards” for best metal video of 2015.

In Studio 666, Rock & Roll Hall of Famers Foo Fighters have yet to record their tenth album which pisses off their manager (Jeff Garlin) who incidentally owes people some money and is banking on their latest and still undone album to save his ass. Needing a place of inspiration to record in, Dave and fellow bandmates (Taylor Hawkins, Rami Jafee, Chris Shiflett, Nate Mendel, and Pat Smear) enlist their managers’ help  to find just that. Enter California realtor (Leslie Grossman) who shows off the very mansion that holds a gorey history. Grohl feels a vivacious connection to the long vacant home and eagerly convinces the other guys to move into the grisly Encino mansion to record their much anticipated 10th album. Once in the house, Dave Grohl finds himself grappling with supernatural forces that threaten both the completion of the album and the lives of his bandmates. A weird and hippie-ish neighbor (Whitney Cummings) cranks up the creepy notch as Dave and his mischievous band of misfits grapple with dark entities and evil forces while trying to stay alive.

Studio 666 is a well blended mix of nostalgic horror films, modern cinematography, and a delightfully sinister approach written by Jeff Buhler and Rebecca Hughes, based upon a story by Dave Grohl. Dark comedy and slapstick jokes are embedded throughout the film that sew together a wonderfully collected piece of humor meets horror funness. The right amount of CGI is added that does not make the film look too fake or over the top and the special SFX Effects are totally on point. The blood and gore felt so real and was graphically detailed that I did find myself squeamish at points. Leslie Grossman pulls out her predictable yet classic character self that is straight up American Horror Story style.  The cast/characters were fantastic, the story fits for the combined genre, and it is gore-y af. The only issue I came across is that the film does go on longer than it should have. A few minutes could have been shaved off as it tends to kill the vibe but overall, a film I highly enjoyed. Studio 666 is funny, graphically morbid, and successfully combines dark comedy with horror in a nostalgic new age piece that will make you laugh, say “ew”, and rock your music lovin’ heart out to.

Studio 666 is in theaters now.

Review: ‘The Prodigy’, Taylor Schilling Adds Dealing With Possession To The Troubles Of Parenting