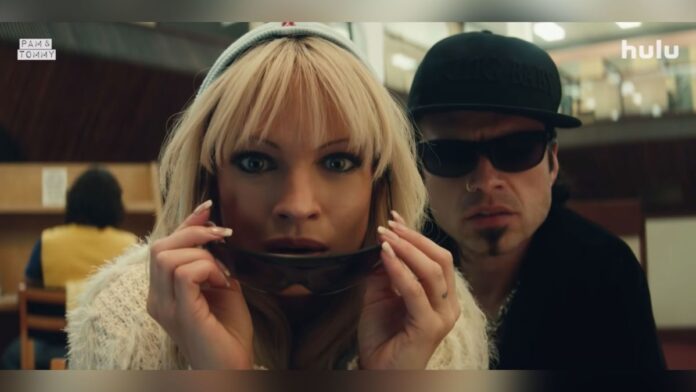 “This is so private. It’s like we’re seeing something we’re not supposed to be seeing. Which is kind of what makes it so f*cking hot.”

As a teenager of the 90s, it was a unique time to come of age in. One of the most impactful things to come out during that time was the internet. Nowadays we have access to pretty much everything on the internet at the tip of our fingers, but during its infancy, the internet was its own Wild, Wild, West. And nowhere was that more prevalent than on the dark side of the Internet. Throughout the history of most forms of media, whichever format pornography chooses, ends up being the dominant form of media. It was true when it was VHS vs Beta, it was true in VHS vs DVD, and it was true in Blu-Ray vs HD-DVD. But nowhere is it truer than looking at the internet. And you can’t discuss the internet and pornography without thinking about the Pam and Tommy Lee sex tape.

Baywatch actress Pamela Anderson and Mötley Crüe drummer Tommy Lee married after four days of meeting each other in Cancun, and subsequently filmed their nuptial bliss. Unfortunately for the couple, after a home burglary, a videotape of their passion was stolen and eventually made its way onto the internet. Nowadays, you can throw a rock on the internet and find a celebrity sex tape, but in 1995, this was the first of its kind and completely unheard of. The release of their sex tape pretty much intrigued the nation at the time and pretty much allowed the Internet to be the way it is today in regard to pornography. Hulu’s newest miniseries Pam & Tommy sheds some light on the sex tape’s origins, but also allows us to see the fallout for both of them: personally and professionally. Developed by Evan Goldberg and Seth Rogen, written by Robert D. Siegel (The Wrestler), and directed by Craig Gillespie (I, Tonya, Cruella), Pam & Tommy sheds light on the infamous sex tape and its devastating effects it had on the couple.

Initially, Pam & Tommy doesn’t really focus on the titular couple. Instead, we are introduced to Rand Gauthier (Seth Rogen), a former pornographic actor turned carpenter who has been working on a construction job at Tommy Lee (Sebastian Stan) and Pamela Anderson’s (Lily James) home. Rand and his partner keep getting annoyed by Tommy Lee. Tommy has his larger-than-life rock star attitude (played expertly by Sebastian Stan) and continues to keep changing his mind about construction plans for his mansion. Now that normally wouldn’t be that big a deal-breaker, but Tommy Lee hasn’t paid them for their work or materials, and is slowly running up a $17,000+ tab. While that’s small potatoes for him, it’s destroying Rand’s pockets. When he tries to talk to Tommy Lee, he keeps getting the cold shoulder and eventually fired… without getting paid. Rand, a student of all forms of religion believes in Karma, and decides to enact his revenge against Tommy Lee. As someone who knows the ins and outs of Tommy Lee and Pam’s mansion (as well as security cameras and procedures), Rand decides to rob them of a safe in their home. The heist goes off as best it could, and now Rand has access to whatever’s in their safe. At first, it’s just a few bucks, some guns, but then Rand discovers a videotape… that just happened to showcase the couple engaging in lots of marital bliss on their honeymoon.

Thanks to the internet, Rand now realizes he can monetize his revenge. He partners with porn producer/actor “Uncle Miltie” (Nick Offerman continuing to shed himself of Ron Swanson) and they try and sell the tape to every adult production in the valley. When advised it’s a non-starter because they would need release forms from the celebrity couple, Rand comes up with the idea of using a website to sell the tape to whoever purchases the tape online. Remember, this is an unregulated internet during the 90s, so the idea of selling a VHS tape and mailing it throughout the country (or even the world) can be done with ease. It’s very interesting everyone’s reaction to just what a unique tool the internet can be, because it’s too new and alien for them to even understand. There are ongoing gags of people not knowing to type “www” or “.com” when typing in a website. Partnering with local mobster Butchie (Andrew Dice Clay) for seed money, Rand and Uncle Miltie then set out to sell the tape.

And sell the tape they do!

As they put things into motion, it starts to spiral out of their control as the sex tape takes a life of its own. Once again, this is something that hasn’t been done before and it becomes its own monster. At first, the couple is oblivious to their lovemaking slowly making its rounds on the internet into everyone’s VHS players across the country. Pam finds out as her crew on the set of Baywatch happen to be watching it on break, and both her and Tommy’s life is upended by forces out of their control.

As the series shifts focus from Rand to Tommy Lee and Pam, you get an intimate look at the couple. Both Pam and Tommy live a life that’s just insane to think of, but the way both Lily James and Sebastian Stan play the roles, you see a young, in love, and reckless couple as they navigate each other as well as deal with the fallout of their private lives played out in the public. Too many times when we see beautiful people engage in these types of sex tapes, we forget they are actual people, and that’s one thing that Pam & Tommy do very well. Tommy Lee, who’s famous for just letting the world see his member is at first ambivalent to the sex tape, but slowly but surely, he’s just as pissed as Pam is. They call the cops, but a burglary of a tape isn’t a high priority, so soon enough comes in private investigators, and even biker gangs hired to find rand and beat the ever-loving crap out of him.

Throughout the 8-episode miniseries, Pam & Tommy showcases not only what was going on at that time in regard to the internet growing through the release of the sex tape, but the cultural moments that are now a part of our public lexicon in relation to the sex tape are displayed. Like American Crime Story: The People Vs OJ Simpson, Pam & Tommy feels like a time capsule that perfectly illustrates how life was during a big cultural moment. Many legal norms for governing the internet and pornography are derived out of the events that transpire during the show. Pam & Tommy also showcases a site that we were not privy to: how the release of marital intimacy can lead to the breakdown of a marriage. This impacted their relationship as well as their careers. Instead of being taken seriously as an aspiring serious actress, Pamela Anderson was reduced to the “sex tape” girl and actually denied plenty of roles you would be surprised she was in the running for, like LA Confidential and Austin Powers. Tommy Lee, being Pamela’s biggest cheerleader was also impacted by the tape as his wife’s naked body was the topic of discussion on late-night talk shows. You can have a new appreciation for the turmoil that something like this would have on their relationship.

Right off the top: SPOT-ON CASTING of Sebastian Stan and Lily James!! They truly embody the characters they are playing. There are so many times while watching you will be like “that’s not Bucky” as Stan really not only looks the part, but also carries the bad boy rockstar persona with ease. Lily James also is a spitting image of Pamela Anderson. You couldn’t have asked for a more perfect casting of the two leads. Now because Tommy Lee is famous for carrying a monster between his legs, we do get our share of full-frontal nakedness. There’s a scene where an obviously high Tommy Lee has a conversation with his penis that just happens to talk back to him and is voiced by none other than Jason Mantzoukas. The surreal scene actually has a talking penis and is hilarious and disturbing at the same time. As great as the casting is, there is a moment where Jay Leno is introduced and the actor (under heaving super-chin prosthetics), looks nothing like the part. It’s somewhat distracting as it’s almost comical how bad comedian Adam Ray looks as Jay Leno.

The only other complaint besides the Leno impersonation is the fact that Pam & Tommy was made without involvement from either Tommy Lee or Pam Anderson. The entire show is about how the couple was violated by having their intimate life broadcasted for the world to see, and it feels like another violation as Pam & Tommy is based on the 2014 Rolling Stone article “Pam and Tommy: The Untold Story of the World’s Most Infamous Sex Tape” and not from the subject themselves. Pam & Tommy in fact, commits the same sin they are criticizing.

That said, Pam & Tommy is an interesting, fun, and often dramatic presentation of a cultural moment that changed how the internet operates forever. As interesting it was to see how neophytes managed how to turn on a computer, plug in a modem, and browse the web, it helps put it into perspective that these was two people who were violated, and not only were their lives forever changed, but the whole world was as a result.