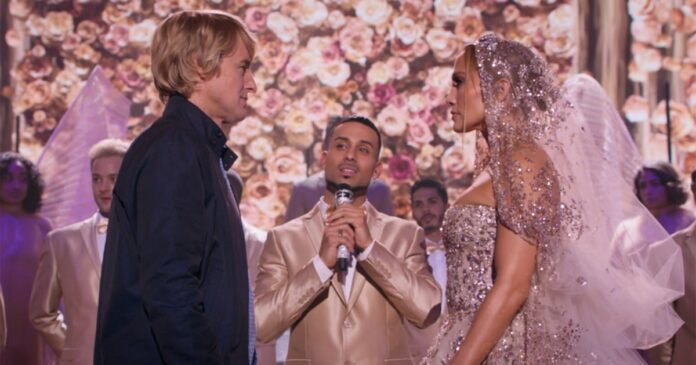 Here’s a shocker that surprises even me: Marry Me isn’t terrible. There ya go, put that quote on the poster! For real, though, my expectations for a traditional rom-com straight out of the early 2000s were incredibly low. And perhaps it has something to do with so many romances over the last couple of years being “pandemic” love stories, often told over Zoom, that a film that leans into the genre’s conventions is warm comfort. And let’s face it, few have Jennifer Lopez’s experience at getting us to engage with the fantasy of a meet cute that sparks an unlikely whirlwind romance, one that mirrors aspects of her own celebrity lifestyle.

Marry Me, which arrives just in time for Valentine’s Day, stars Lopez as Kat Valdez, a Beyonce-like global superstar who is a brand unto herself. She’s set to marry her apparent soulmate, Bastian (Colombian singer-songwriter Maluma), on an international stage in front of millions, forming what would be a Beyonce/Jay-Z style power couple. But literally moments before they can say “I Do” on stage in front of a packed crowd, she learns that Bastian’s cheated on her. Rather than just breaking things off, Kat takes a leap of faith and plucks Charlie (Owen Wilson) out of the crowd because he was carrying a “Marry Me” sign handed to him by his daughter, Lou (Chloe Coleman).

And thus, Marry Me has sort of flipped the usual paradigm that we see in these films, the fantasy in which a young woman is “chosen” by a handsome prince to become his princess. Charlie, a frumpy math teacher and divorcee, hardly makes for the perfect match with a go-getter and global influencer like Kat. Her fans don’t exactly dig it, either, and the press has a field day with this ridiculous romantic faux pas. So she and Charlie decide to just lean into it. Rather than getting the marriage annulled, they’ll actually try it out for a few months, just so Kat doesn’t look like an absolute impulsive lunatic.

To Marry Me‘s credit, it doesn’t try to pretend this setup is anything other than ridiculous, but there is some subversion to go along with it. For one thing, Charlie isn’t some fan who worships at Kat’s feet. He doesn’t understand her carefully orchestrated social media lifestyle at all, and Owen Wilson does a good job of capturing how an ordinary person would fit, or wouldn’t fit, in such a scenario. Meanwhile, Kat starts to fall in love with Charlie’s simple life schooling the mathletes to win the big competition coming up, and even teaches the kids a trick or two, by way of dance number naturally, to stay ahead of the game. Yes, it’s all very safe, including Sarah Silverman as Charlie’s pushy/loyal best friend.

Lopez has invested a lot of herself into this film. No surprise, Kat is basically Lopez getting to play a version of herself. Lopez’s own marital history is inescapable in Kat’s relationship woes and occasional flights of fancy. When Kat is humiliated in the press for her frequent marriages and failed partnerships, you can’t help but recall the many jokes made at Lopez’s expense for the same. Does Marry Me go particularly deep on all of this? Of course not, but Lopez plays Kat’s reaction to it quite well, drawing from her own experience. When Kat complains that despite her astronomical success she’s never actually been nominated for anything, you can’t help but recall Lopez’s occasional Oscar snubs, or how she always seems to be fighting for the respect others receive easily.  Lopez, who is also a producer on the film, contributed nine brand new songs to the soundtrack, and performs a few upbeat numbers that are sure to make her fans happy.

Her romance with Wilson lacks heat, but then again would anybody expect it to have any? I mean, really? That said, I did like Wilson’s everyman schtick. He sortof folds neatly into the background when Lopez is around, and that makes sense. The rest of the cast is really good, as well, with Coleman showing why she’s been such a rising star since Big Little Lies and My Spy. Silverman is terrific as always, in a role that isn’t the least bit raunchy, and John Bradley, who was the best thing about Moonfall recently, brings more depth to his role as Kat’s manager than anybody accounted for.

Marry Me is a surprisingly delightful throwback to the Lopez that gave us The Wedding Planner, Maid in Manhattan, and The Back-Up Plan, but is informed by her years since. I’m not sure she could have made this movie back then. It’s not changing the game or anything, but is a reminder that Lopez remains one of the best at this genre and can return to it anytime she pleases.

Marry Me is available now in theaters and streaming on Peacock.