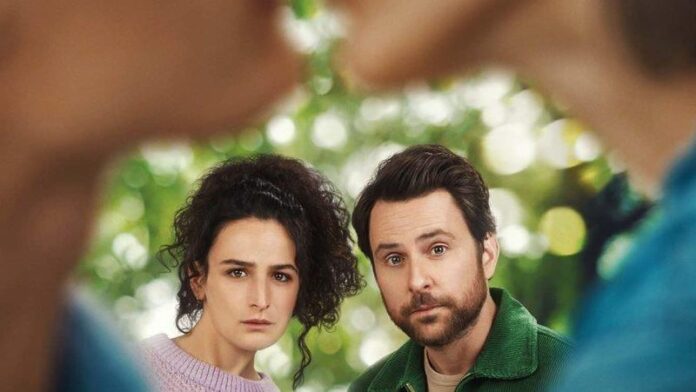 Boy meets girl, another girl meets boy. Then their significant others break up with them. So, boy and girl befriend each other and then team up and scheme a way to make their exes break up with their new romantic partners. If you have ever watched a romantic comedy over the last two decades, you already know the formula: the two will eventually fall in love… right? Amazon’s newest rom-com I Want You Back manages to be formulaic, yet fresh at the same time.

Peter (Charlie Day) gets dumped by his girlfriend Anne (Gina Rodriguez). After six years together, his “boringness” has made her realize that she wants more out of life than just simply existing with him and their relatively normal life. He’s a mid-level manager at a nursing home company and she simply wants more out of life than what he’s offering. At the same time, dental office receptionist Emma (Jenny Slate) gets dumped by her gym rat personal trainer boyfriend Noah (Scott Eastwood). Now normally, these two would simply lick their wounds and try to move on with their lives, but in I Want You Back, they happen to both be crying in the office stairway at the same time and become friends by trauma bonding over the fact that they both got dumped by the loves of their lives. So, they decide to team up and try to find a way to make their exes break up with their current lovers.

Peter’s assignment is to get in good with Noah and get him to break up with his new girlfriend Ginny (Clark Backo), so he joins the gym and starts a brief bromance with him. As much as Peter doesn’t like going to the gym and being trained by Peter, they manage to buddy up. As Peter tries to get Noah to go clubbing and try and enjoy the simple idea of being a bachelor, Emma tries to seduce Anne’s new boyfriend Logan (Manny Jacinto), who is the director of a local school play of “Little Shop of Horrors,” something Anne is interested in as she loves theater. Both scenarios breed hilarious yet disastrous results: Peter and Noah taking Molly with some girls they meet at a club (which turn out to be underage), and even a funny cameo by Pete Davidson, and Emmy, Anne, and Logan attempting the most awkward threesome ever.

Hilarious hijinks aside, the charm of course is the relationship that grows between Peter and Emma. They both help each other out in a rough time, and genuinely start to care for each other, even though they still want their exes back. Normally Charlie Day has just one mode of acting “Charlie from It’s Always Sunny in Philadelphia.” But in I Want You Back, he manages to have room to do more than just be “the funny guy.” Jenny Slate always plays a character with wit and funny at the same time, but there is a moment where she’s called to be a part of the high school play and be Audrey in the school’s Little Shop of Horrors play and has to sing “Suddenly, Seymour” (opposite a kid of course) and not only does Jenny Slate bear her soul acting-wise, but she gives Ellen Greene from (the original Little Shop of Horrors movie) some stiff competition singing-wise. Weirdly though, the breakout performer in I Want You Back is Scott Eastwood. As I’ve said before in my review of Dangerous, Scott Eastwood doesn’t really have the chops to really pull off a leading man performance. But in I Want You Back, he’s hilarious, charming, and downright great in his role as Emma’s former boyfriend, and a great wingman for Peter. If Eastwood does more roles like this, he’ll have much more success as he was awesome.

Despite having a predictable storyline, I Want You Back manages to stay fresh by, well, not being predictable. Towards the end of the film, many of the characters make decisions that might not be expected with a usual Rom-Com with similar story beats. It’s a good thing that the movie zigs when we are expecting it to zag. It makes the film more interesting. Kudos to writers Isaac Aptaker and Elizabeth Berger for flipping the script at just the right time. In fact, as the film crescendos to a close, the ending of the film is rather ambiguous, and we the audience are left to our own interpretation as to where the story goes after the credits roll. As this weekend is Valentine’s Day, I Want You Back is the perfect way to cap off the weekend as we all ponder about love.

I Want You Back is currently streaming on Amazon Prime.