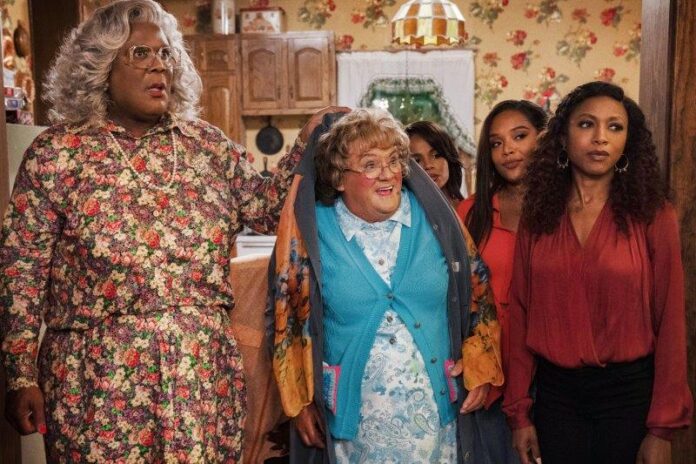 Let me start this review by putting my bias on front street: I’m not the biggest fan of Tyler Perry’s Madea movies! They just aren’t my bag. I respect the hell out of Tyler Perry’s hustle and ability to build an empire out of a specific genre and grow his audience as well as grow his cinematic power to the point that now big-budget movies and shows (including the Marvel Cinematic Universe or The Walking Dead) uses his “Tyler Perry Studios” for their productions. Outside of his Madea movies, he’s also a fine actor and one of my favorite Star Trek admirals (still not a fan of his version of Alex Cross though). But in regard to his movies centering on Mabel “Madea” Earlene Simmons, it’s just not something I’m a big fan of, I’m just not his audience for these types of flicks.

That said, A Madea Homecoming is a fun, silly movie full of hijinks, family, endless, ENDLESS drama, and is overall an entertaining movie!

The twelfth film in the Madea Cinematic Universe (the other MCU) focuses on a pseudo-family reunion (hence the homecoming title) as Madea’s great-grandson Tim (Brandon Black) is graduating from college and everyone’s getting together to celebrate. Of course, in addition to Madea, all the usual family members are coming to the celebration. Aunt Bad (Cassi Davis-Patton), Leroy (David Mann), Cora (Tamela Mann), Laura (Gabrielle Dennis), and everybody in between is coming to the celebration.

In addition to being his college’s valedictorian and giving the graduation speech, Tim has a secret he must share with his family. His best friend and college roommate Davi (Isha Blakker) comes to the family celebration for moral support. It’s incredibly clear what his secret is, and with it being 2022, it’s not even a big deal enough to be a secret. In fact, A Madea Homecoming makes light of the fact that his secret is no big deal when he does share it with the family. However, he’s not the only one who has a secret to share.

And that’s where A Madea Homecoming gets MESSY!!!

Pretty much every family member has some weird, soul-crushing secret that gets let out. Tim’s father has a secret, his mother’s best friend has a secret, his mother has a secret, hell even his best friend Davi has a secret that gets let out. The whole time watching you can’t help but think “this is juicy, and messy as hell” as you are watching it on your streamer. As with most Madea movies, as the drama unfolds, Madea is the one to offer words of wisdom to help squash the issues and bring the family back together in time for the third act.

In addition to the usual “alt-MCU” characters, members of Davi’s family come to the celebration and surprise him (and Madea’s family) from Ireland. Turns out Davi is half black and half Irish. Davi’s Aunt Cathy (Jennifer Gibney) and his grandaunt Agnes (Brendan O’Carroll) come to the celebration for some cross-cultural comedy bits. Agnes says “nickers” a little too close to the N-Word for Madea’s comfort. However, when Agnes gets some of Madea’s edibles, they have more in common and get along fine. If Agnes and Cathy seem familiar to some, they are from the BBC Scotland television show Mrs. Brown’s Boys, and both O’Carroll and Gibney reprise their roles from the show across the pond. Turns out Tyler Perry isn’t the only cross-dressing comedian in this movie as O’Carroll steals the show going toe to toe with Perry.

With A Madea Homecoming being the usual alt-MCU movie, there are plenty of jokes and enough “Hallelujer” going around throughout the film’s 105-minute runtime. For the most part, the jokes do land. However, there is one bit that Madea does a retelling of how Rosa Parks stole her boyfriend and only sat in the back of the bus to avoid Madea giving her a beatdown, which is the cause of the Montgomery Bus Boycott that is incredulously cringe and not funny in the slightest and goes a little too long to the point where the skit is stale. But as stated, Tyler Perry finds a way to involve good family moments and impart Madea’s wisdom for the audience to enjoy

Overall, A Madea Homecoming is an entertaining and fun ride for those who are fans of the alt-MCU. It might even be able to convert naysayers like myself…maybe not.

A Made Homecoming is currently streaming on Netflix.