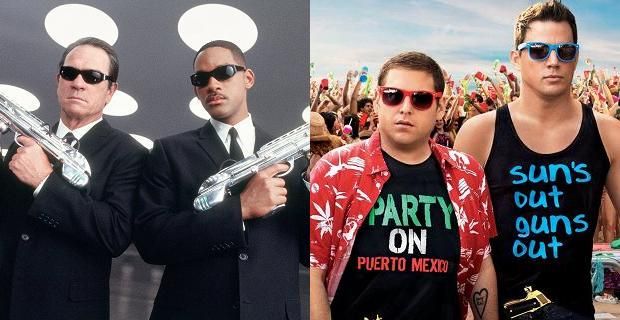 Of the many completely unimaginable projects that I’ve heard about in my many years of doing this, undoubtedly the Men in Black/21 Jump Street crossover was the strangest. Sony was really throwing everything against the wall here, taking one of their floundering franchises in MIB and combinining it with the surprisingly great Jump Street films. Desperation? Probably. But under the guidance of Phil Lord and Chris Miller it might have been spectacular. Unfortunately, it never happened.

However, we do at least get to hear what might’ve been, thanks to an interview Lord and Miller gave on the Happy Sad Confused podcast. What would’ve happened when Channing Tatum and Jonah Hill met up with the Men in Black after solving a medical school case? You may recall, Medical School was one of the dozens of future sequels seen during the hilarious 22 Jump Street credits…

“It’s true that there have been a lot of these things developed,” Lord said. “There was, believe it or not, a Men In Black/Jump Street crossover script that was very funny and very crazy that we really adored. Basically, the idea was Jonah and Channing, a thing happened while they were doing their medical school adventure that got them embroiled into the world of Men In Black and that got them teaming up to stop an alien takeover type of thing.”

“It was very funny, it was crazy trying to manage these two franchises and not drive them both into the ground seemed like a real challenge,” Lord continued.

Miller added, “One of my favorite ideas was the Men In Black, the Black Suits were like martial arts belts that you had to work your way up to black and [the Jump Street guys] were issued powered blue Men In Black suits.”

According to Lord and Miller, the film was “very close” to becoming a reality. There’s a big part of me that wishes it had, because I have no doubt they could’ve turned such an insane idea into something great.