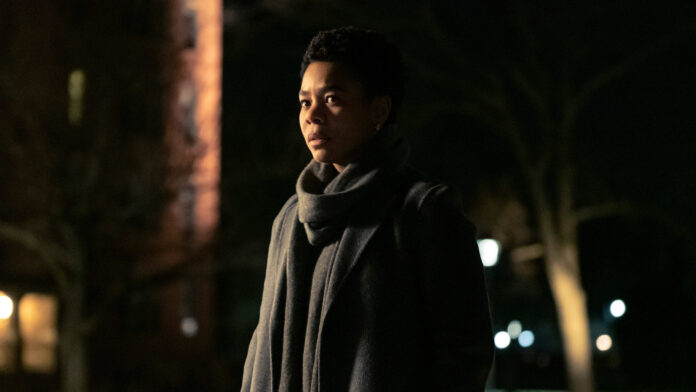 Being Black in America can be its own kind of horror story. That’s why the genre is so perfectly suited to examinations of race, as we’ve seen in a plethora of films such as Get Out, Antebellum, and Candyman. Mariama Diallo’s debut feature, Master, joins their ranks and as fitting drama surrounding the issue it’s an effectively sharp look at the struggles of three Black women trying to fit in at a prestigious, all-white New England university. But as effective horror, fans looking for a good fright may find it seriously lacking in enough scares to bind its themes together.

Gail (Regina Hall), Liv (Amber Gray), and Jasmine (Zoe Renee) are breaking barriers at Ancaster College. Black members of the student body and the faculty are a rare breed at the nearly all-white university, producer of future senators and even Presidents. Gail has just been named “Master”, which is something like a Dean of Students, a powerful position that has her looking to change the culture. Liv is a prominent literature professor up for tenure, while Jasmine is one of her students, a first-year who enters the hall eagerly, hoping to make her mark. It doesn’t even matter to her that the other students joke about her dorm being haunted. The school was built on the spot of a gallows hill used during the Salem Witch Trials, after all.

Most of the action is centered on Jasmine’s experiences, navigating the white spaces that seem friendly on the surface, but reek of sinister intent. There’s the white roommate who puts on a smile, but holds secret resentment. The boy at the party seems nice, but looks at the new Black girl with a little too much fascination. Diallo’s witty, incisive script has the tenor of someone who has been there, done that.

But the experiences of these women are not one and the same. They all navigate the schools hallways, taking in its racist heritage displayed on plaques and through statues, but Master makes clear that Black people are not a monolith. Gail is pushed hard to make forceful changes, leveraging her status as the first Black woman to be Master, but faces push back at nearly every turn from sources expected and unexpected. Liv and Jasmine might share a teacher/student relationship but they do not come from the same place. They can’t connect on any level, and in a terrific scene Jasmine calls the professor out for assuming her academic troubles are because of a lesser upbringing fueled by racial disadvantages. When Master clicks on a dramatic level, exploring the daily nightmares that can come from being Black in a place where white power has always held sway, it’s easy to see Diallo as a fresh new voice in the genre.

But horror may not be where it’s at. Diallo makes ample use of shadow to create an effective gloom, but there isn’t much novelty in the way they are shot. Portraits of racist white men are actually scarier when seen in the daylight, and other jump scare attempts fall flat and feel unnecessary. There is more than enough creepiness to go around without resorting to tired horror tropes.

Nearly saving the day are the performances, led by a powerhouse turn by Hall as a Gail finds herself in an intractable position. Is Gail truly capable of initiating change? Or just creating the illusion of change? As Jasmine, Renee has the greatest evolutionary arc from wide-eyed dreamer to a young woman disillusioned that even her privileged upbringing is no protection from the real world. And Gray delivers a twist so flawless it’ll have you rethinking every single line Liv has given. Master is uneven at best, offering pointed commentary and real dramatic stakes but failing to offer anything scarier than what is seen in reality every day.